You are here: Home1 / All Articles2 / Keto Course3 / Juice Cleanses Debunked! Why You Should Avoid Them- Thomas DeLauer

More specifically, you want help with Juice Cleanses Debunked! Why You Should Avoid Them- Thomas DeLauer?

This Post Was All About Juice Cleanses Debunked! Why You Should Avoid Them- Thomas DeLauer. 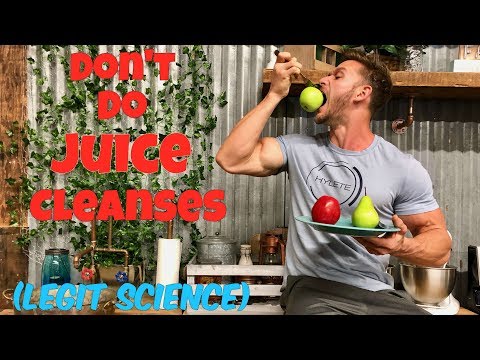 Subscribe for 3x Videos Per Week here:
Get Your Bone Broth HERE:

Juice Cleanses Debunked! Why You Should Avoid Them- Thomas DeLauer…

Low Calories/Fiber:
Most juice cleanses last from anywhere between 3 and 14 days and are usually within the caloric range of 600-1200 calories, which is low for almost everyone. The continued low-calorie intake can send the body into starvation mode (prolonged periods of low energy intake) and the body will try to conserve calories by slowing down metabolism – most weight lost is usually just water weight.

Low Protein:
Juice cleanses are also very low in protein and it is not just needed to build muscle – needed to build healthy immune cells and is used to make enzymes and hormones. Protein can also be quite satiating, by reducing levels of ghrelin – a study from the American Journal of Clinical Nutrition found that increasing protein consumption from 15 to 30% of calories made subjects eat 441 fewer calories each day, without intentionally restricting foods (1)

Fructose Metabolization:
Should be known that while every cell in the body, including the brain, can use glucose, fructose is metabolized differently – the liver is the only organ that can metabolize fructose. Whereas with glucose, your liver has to break down only 20% of it (we weren’t designed to consume much fructose, if at all) Since every cell in your body can utilize glucose, it is used up fairly quickly after consumption. Conversely, when fructose is metabolized, it turns into free fatty acids (FFAs) and triglycerides, which get stored as fat. These fatty acids accumulate as fat droplets in your liver and skeletal muscle tissues, causing insulin resistance and non-alcoholic fatty liver disease (NAFLD) Additionally, fructose converts to activated glycerol (g-3-p), which is used to turn FFAs into triglycerides – The more g-3-p you have, the more fat you store (fructose is a lipophilic carb) A byproduct of liver metabolism is that your liver begins to create uric acid, causing blood pressure to increase and can result in gout. Fructose has no effect on ghrelin (glucose, for example, can suppress ghrelin → suppresses appetite) and interferes with your brain’s communication with leptin, resulting in overeating (2,5)

Study:
A study conducted at the University of Illinois at Urbana-Champaign fed mice a diet in which 18% of the calories came from fructose vs mice whose diet included 18% glucose. The mice who ate fructose gained more weight, were less active, and had more body and liver fat after 10 weeks. All the mice in the study ate the same number of calories, the only difference was the type of sugar they consumed (3)

5) Fructose and Fatty Liver – Why Sugar is a Toxin – Diet Doctor. (n.d.). Retrieved from

Soda vs 100 Percent Real Fruit Juice: What is Healthier?

Coronavirus Destroys Sense of Smell: Why?

Can I Eat Oatmeal on a Ketogenic Diet?

The Most Powerful Skin Vitamin: Not Vitamin C or E

Ketosis and Fasting Coaching: Live with Thomas DeLauer- When is the Best Time... Scroll to top