This Post Was All About Is Adrenal Fatigue Real: Symptoms and Treatment: Thomas DeLauer. 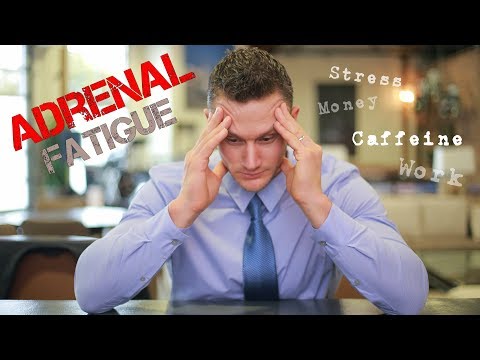 Adrenal fatigue is characterized by relentless, debilitating fatigue and can also include muscle weakness, decreased appetite, and weight loss – some people even experience nausea, vomiting, and diarrhea.

Adrenal fatigue occurs when your adrenal glands aren’t able to produce enough of certain hormones, such as norepinephrine, cortisol and DHEA, which allow you to respond to the conditions of your daily life in healthy and flexible ways.

Simply put, the theory behind adrenal fatigue is that your adrenal glands are unable to keep pace with the demands of perpetual fight-or-flight arousal.

As a result, they can’t produce quite enough of the hormones you need to feel good (1)

So, What are Your Adrenal Glands?

Located at the top of each kidney, the adrenal glands are two, triangular-shaped organs that measure about 1.5 inches in height and 3 inches in length

They are also known as your body’s shock absorbers – produce hormones that help the body control blood sugar, react to stressors like a major illness or injury, and regulate blood pressure.

Adrenal fatigue is caused when your adrenal glands cannot cope due to you being overly stressed – basically, the main cause is stress

The adrenal glands are an essential part of your body’s responses to any kind of physical, emotional or psychological stress.

Many different types of stress can cause adrenal fatigue. Examples of physical stress include any severe or recurrent infection or illness, having an operation, poor diet or a severe injury. An emotional or psychological stress may be caused by many situations, including relationship, family or work difficulties. (3)

However, there are 3 specific hormones that can be a cause of adrenal fatigue:

Also called adrenaline is commonly thought of as the fight-or-flight hormone. It’s produced when something is (or you think it is) threatening.

This hormone makes your heart pound, your blood rush to your heart and large muscle groups, your pupils widen, your brain sharpens, and your tolerance for pain increase—basically, it prepares you for battle.

Cortisol increases your appetite and energy level while toning down your immune system’s allergic and inflammatory responses.

This hormone stimulates the storage and release of energy in the body, helps the body resist the stressful effects of infections, trauma, and temperature extremes, and helps you maintain stable emotions.

Ideally, cortisol is released into the system only on an occasional basis, rather than in response to chronic stress.

If cortisol levels become too high for too long, they may have undesirable side effects, including muscle wasting, kidney damage, fluid retention, spiking blood sugar levels, weight gain, and increased vulnerability to bacteria, etc.

Rid the diet of excess sugar and processed grains

These are very hard on the adrenal glands. Eating excess sugar/starches will cause blood sugar to spike and insulin to come to the rescue due to excess glucose in the bloodstream.

Blood sugar then drops or plummets, causing the adrenals to work to bring levels back up.

When you are suffering from fatigued adrenal glands, cortisol levels drop and make it difficult to maintain normal blood sugar levels. People with adrenal fatigue tend to have low blood sugar.

Natural salts contain many trace minerals, which help to support the adrenals.

Adrenal fatigue reduces the production of the hormone aldosterone, which helps regulate salt in the body.

When your adrenal glands are out of whack, your DHEA production will suffer greatly, and your stress hormone cortisol can roam freely inside of your body, destroying all the hard work you are doing to get your endocrine system back in shape.

One of the best ways to support DHEA in the body is through magnesium supplementation. (5)

2) What Are The Adrenal Glands? | Adrenal Fatigue Solution. (n.d.). Retrieved from

These DAIRY Foods are the Healthiest (and most unhealthy)

That SHREDDED Life Ep. 16 | I Can’t Believe She Did It | The BEST My Squats Have Looked