This Post Was All About Intermittent Fasting | 5 Ways to Accelerate Your Fast | Fasting Tips -Thomas DeLauer. 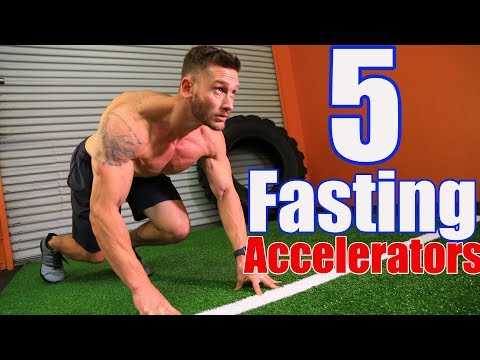 Higher Protein Intake & Thermic Effect:
TEF, or the thermic effect of food, is basically the energy expended by the human body to process food – it’s also known as specific dynamic action (SDA) or dietary induced thermogenesis (DIT). The thermic effect of food can vary quite substantially, but protein is actually the hardest food for your body to process and utilize. While carbs are made up of simple sugars, which break down relatively quickly, proteins are much more complex molecules. The process of dismantling these chemical bonds and reducing the proteins to their component amino acids takes longer, so protein foods take longer to digest. Therefore, your body wastes around 20% of the calories in protein in its processing and the release of heat. Pepsin is the active protein-digesting enzyme of the stomach – when pepsin acts on the protein molecule, it breaks the bonds that hold the protein molecule together, called peptide bonds. Since we know that the prefix ‘poly’ means ‘many,’ a polypeptide is many amino acid units joined together. These polypeptides then move into your small intestine, where digestion will be completed by additional enzymes. In the small intestine, pancreatic enzymes that we previously learned about, called trypsin, chymotrypsin, and carboxypeptidase, go to work breaking down the polypeptides. These enzymes enter the duodenum via the pancreatic duct and these pancreatic enzymes are helped by the brush border enzymes. Brush border enzymes are special enzymes found on the microvilli of the small intestine that complete digestion. The peptide bonds holding the polypeptides together continue to be hydrolyzed, or broken down, and result in smaller units called peptides.

Fasting Teas (Green Tea) – EGCG & Autophagy:
A study in the journal PLoS One found that EGCG increases hepatic autophagy by promoting the formation of autophagosomes and by stimulating autophagic flux in hepatic cells. EGCG increases phosphorylation of AMPK, one of the major regulators of autophagy. Also observed that lipid droplet within autophagosomes and autolysosomes and increased lipid clearance by EGCG.

ACV – Enhanced Fat Loss:
The main mechanism by which acetic acid intake suppresses body fat accumulation is believed to be due to the up-regulation of fatty acid oxidation. In one study, researchers analyzed for SREBP-1, an enzyme that regulates gene expression of lipogenic (fat manufacturing) enzymes and PPARalpha, a gene that regulates fatty acid oxidation, in the liver, where almost all acetate in the portal circulation is metabolized. Researchers found that PPARalpha gene expression in both the high and low-dose groups was significantly up-regulated. Uncoupling protein 2 (UCP2), which plays a role in thermogenesis (metabolizing fats to produce heat) was also elevated

How to Deal With Someone Sneezing Around You

Would You Eat a Credit Card Weekly?

What To Expect From Keto Diet Results? – Dr.Berg

I Have Low Testosterone… What Happens Next?

The Difference Between the Blood Type Diet vs. the Body Type Diet?