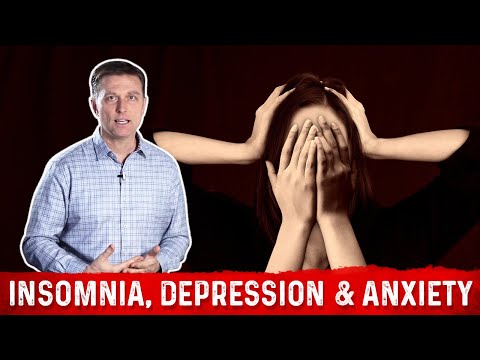 Dr. Berg talks about insomnia, depression and anxiety. The light and dark cycles stimulate hormones, release vitamin D which influence mood and sleep and awake mechanisms. Potassium, calcium, magnesium are the key minerals that help you sleep. Insulin resistance also can keep you up all night urinating. Hypoglycemia also can trigger adrenaline at night and keep you up. Vitamin B1 is vital in anxiety and B3 is key for preventing depression.
LINK FOR INSULIN RESISTANCE:

Walking is the best exercise for calming the adrenals and helping your stress and sleep. Nutritional yeast will give you the B-vitamins to help your mood but your digestive system can be preventing your absorbing your B-vitamins. Hypothyroidism can also the underlying root:

The adrenal gland is usually behind the stress effect, which prevents sleep – this is called flight or fight. Too much coffee can prevent the adrenals from working correctly. Trauma, stress, too much of the news. You really need to control what you watch.

The 21st Century Cures Act (HR 6) is up for vote in the US Senate. Senate Majority Leader

This bill will allow drugs and medical devices to be fast-tracked through FDA approvals without any requirement for clinical trials. Amendments are being proposed to exclude psychiatric devices and drugs from this bill, while allowing passage on medical life-saving drugs.

What Did the Caveman Really Eat?

Recommended Supplements for People Over Age 50

These SLOPPY Keto Foods Trigger INFLAMMATION (what to eat instead)

Vitamin C MEGADOSING for Prevention of Illness (Science + My Opinion)

What’s in MY Pantry Right NOW During the Quarantine

Constant Urge to Pee? Here’s Why…