You are here: Home1 / All Articles2 / Keto Course3 / Ignored Causes of Heart Disease

This Post Was All About Ignored Causes of Heart Disease. 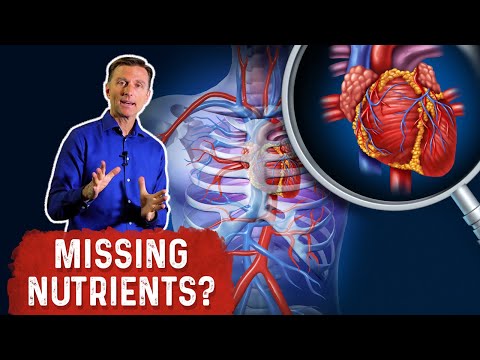 Dr. Berg discussed about the heart in relationship to nutritional deficiencies. The heart is one of the main muscles of the body that responds to nutrition very quickly. Arrhythmia is a problem with the pacemaker of the heart, a neurological thing that keeps the heart rhythm requires electrolytes. Not having enough electrolyte would create all sorts of abnormal heart rhythm happen in the body.

Calcium – it helps contract muscles. Calcium deficiency could cause tetany, muscle twitch and too much calcium could create a rhythm problem with the heart. Vitamin D3 increases the absorption of calcium by 20x in the small intestine and Vitamin K2 helps avoid buildup of too much calcium in the arteries or other soft tissues.

Magnesium – Deficient in magnesium could cause leg cramp. Magnesium is involved in relaxation of muscles and it is very important for muscle cramps prevention.

Sodium – low in sodium will cause feeling weak and too much sodium would cause high blood pressure.

Potassium – The body needs 4,700mg of potassium daily. It is needed for the electrical connectivity of the nervous system and the muscles, it also helps lower blood pressure and lower the pulse rate.

Insulin resistance is a condition where the cell can’t absorb the minerals well anymore and it’ll start developing all sorts of issues in the arteries. Plaquing in the arteries develops after a lesion or oxidative problem with the artery wall.

Heart attacks occur during a stress events because the adrenal triggers it. The adrenal hormone called adrenaline has one function of vasodilation the coronary artery, the main blood supply to the heart itself.

Vitamin B1 is really important in preventing the heart from enlarging. Respiratory and breathing problems will occur when you are deficient in vitamin B1. Some of the B vitamins helps the arteries constrict and some helps with vasodilation.

How Does Alcohol Affect Intermittent Fasting?

Hormones Out of Balance….This is Why! Scroll to top