You are here: Home1 / All Articles2 / Keto Course3 / How to Eat Keto at a Gas Station our Convenience Store

How to Eat Keto at a Gas Station our Convenience Store

More specifically, you want help with How to Eat Keto at a Gas Station our Convenience Store?

This Post Was All About How to Eat Keto at a Gas Station our Convenience Store. 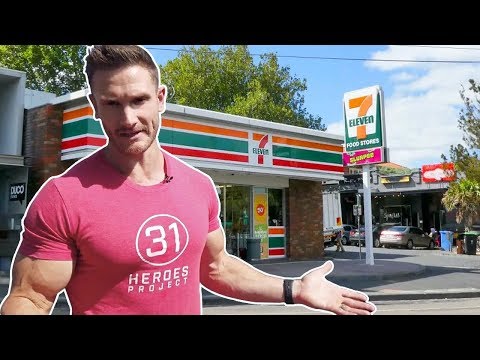 Full disclaimer: this stuff is not going to be super clean. It’s going to be stuff that is just typically at a 7-Eleven or a convenience store that just so happens to be keto.

Maybe some almonds, maybe some cheese sticks, things like that. We’ll probably end up getting kicked out because it’s just going to look weird. And we’re in there with a camera, even though we’re kind of discrete.

These Baby Bell cheeses are perfect. Good little snacks. Almost all this stuff we’re going to talk about today is going to be snacks, right? You’re not going to get good wholesome meals.

You’re not going to be able to get like a wide spectrum variety of nutrients. These things are really cool. Mozzarella and prosciutto. I’m going to go with prosciutto.

Just so you guys know, the difference between the cracklin curls and like regular porks, so these have a little bit more of the fat in them. So you’re definitely going to get more fat with like the crackling curls than you would with like the regular pork rinds. Not a whole lot of options here. Let’s see what we got.

So these things, when you get down to the protein bars, this is where you can run into a problem. The Quest bars say they’re keto friendly. They are so full of sugar alcohols, you will be on a quest to the toilet. That is where they got the name.

Even though they might look like they’re keto friendly because of the fiber and the sugar alcohols. No, trust me. and even if they were, it would defeat the purpose of doing keto because you just don’t feel that great. I don’t have anything against Quest, to be honest. I think they’re doing good things, but like that, come on.

Tiger’s milk, definitely no good. When I was growing up, I ate a lot of those though. Robert Irvine’s FitCrunch. Just out of curiosity, what’s in these things?

You got 27 grams of carbs, six grams of sugar, a bunch of sugar alcohols. They try to make them low carb, but they’re just so many sugar alcohols. I just, why? When you’re better off to just get nothing. None of these. These are not good to go.

Yeah, and the protein bars are tough. Trail mixes. No go. I’m trying to think… The Quest bars, the same kind of thing. They try to say… Hey, it’s a Quest cookie. 20 grams of carbs, 10 grams of fiber. But look at the ingredients in it. We got protein blend, milk protein isolate, whey protein isolate, butter, which really isn’t all that bad.

Then a erythritol, palm oil, cocoa, unsweetened chocolate, calcium, caseinate water, natural flavors, cocoa butter, and then a bunch of other preservatives and stuff like that.

Basically it’s a bunch of whey protein byproducts consolidated into a cake. Would it work on keto? Would it kick you out? Probably not, but like again, why? I just think there’s better options.

So anyhow, $20, got kicked out, got a story, and you get a little bit of insight in science. I’ll see you in the next video.

Prolonged Fasting Too Hard? WATCH THIS

Is Your Fat Giving You Inflammation?

Does Eating Before Bed Make You Fat and Gain Weight? | Weight Loss Tips