You are here: Home1 / All Articles2 / Keto Course3 / How to Burn More Fat While You Sleep Webinar

More specifically, you want help with How to Burn More Fat While You Sleep Webinar?

This Post Was All About How to Burn More Fat While You Sleep Webinar. 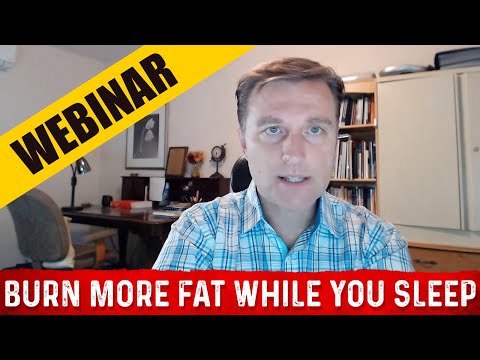 Dr. Berg discusses about the importance of sleep and losing weight. He discusses about burn fat at home. The growth hormone is a very strong fat burner hormone and there are 3 things that trigger this hormone – Sleep, Intensive Exercise and Small Intake of Proteins throughout the day. Considering normal sleep patterns you need somewhere between 7.5 – 8.5 hours of good sound sleep to burn fat fast. There is a relationship between sleep and fat burning. Poor sleep can increase hunger, slows metabolism and weight loss, increases stress, increases muscle tone loss, causes fatigue, lowers mood, increases risk of diabetes, increases risk of heart attacks, lowers immune function, decreases life span. The main reasons for poor sleep are hot flashes, digestion, pain, heart, sleep apnea, stress. He then talks about fat burning foods that should be included in our regular diet to lose weight. For better sleep it is essential to improve our lifestyle and adopt healthy eating habits.

Join Dr. Berg and Karen Berg for a lively discussion on KETO and IF this Friday at 11:00 AM ET

Postmenopausal Estrogen Comes From Your Own Fat

Plants Do Not Like to be Eaten: Thus the Anti-Nutrients

How to Get into Flow Scroll to top