You are here: Home1 / All Articles2 / Keto Course3 / How to Burn Fat AFTER a Workout Ends – Scientific Timing

More specifically, you want help with How to Burn Fat AFTER a Workout Ends – Scientific Timing?

This Post Was All About How to Burn Fat AFTER a Workout Ends – Scientific Timing. 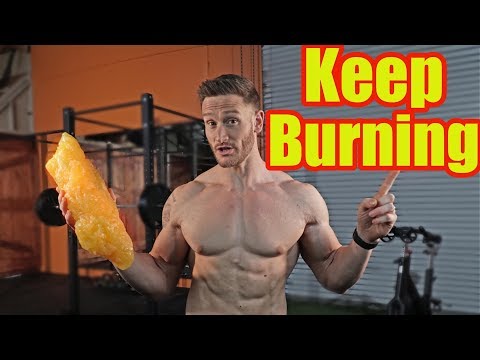 1) Replenishment of Energy Resources: Replenishment occurs for the immediate source of energy, known as the phosphagen system, which is comprised of creatine phosphate and ATP (adenosine triphosphate). In addition, lactate, a molecule that is produced during more intense exercise, is being converted to pyruvate for fuel utilization. The body is also restoring the muscle glycogen (a stored form of glucose) that has been used during the exercise bout.

2) Re-oxygenation of Blood and Restoration of Circulatory Hormones: During exercise metabolism, large amounts of oxygen are used to break down food substrates for energy. Therefore, the body continues to expend energy after exercise to re-oxygenate the blood. In addition, in the postexercise period, the body restores the levels of circulatory hormones, which increased during exercise, to normal.

3) Decrease in Body Temperature: As energy is liberated from the exercising muscle tissues of the body, heat is produced. Thus, during EPOC, the body must expend energy to return to the normal core body temperature.

4) Return to Normal Ventilation and Heart Rate: Energy expenditure is greatly elevated as the body rapidly returns to a normal breathing rate. Heart rate is also returning to a pre-exercise rate.

During exercise, the amount of ATP and creatine phosphate in the blood deplete significantly, but they are replenished in the recovery period when VO2 is elevated
Also during recovery, the 70% of lactate accumulated in the muscles is removed and released into the blood, further producing energy

A study conducted in the journal Metabolism had subjects bicycle at intensities of 29%, 50%, and 75% of VO2 max for 80 minutes

Researchers found that the greatest EPOC was seen in the 75% group, lasting for about 10.5 hours and resulting in an additional 150 calories burned

Subjects were assigned to one of two groups and did 30 minutes of running: one group ran continuously at 70% VO2 max and the other did sprint intervals, pushing themselves to 105% of VO2 max for 1 minute followed by 2 minutes of rest

The Bigger Problem with Chronic Inflammation

Keto Rash is a Vitamin B2 (Riboflavin) Deficiency

What Do You Do If You Get Ketoacidosis? Scroll to top