This Post Was All About How Omega 3 Helps Build Muscle: Increase Protein Synthesis- Thomas DeLauer. 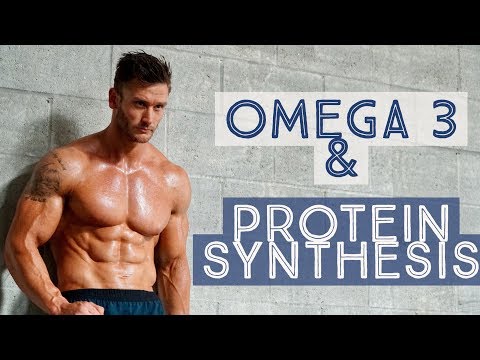 How Omega 3 Helps Build Muscle: Increase Protein Synthesis- Thomas DeLauer… Preliminary studies on burned rats and tumor-bearing mice have found that omega-3 fatty acid supplementation, with or without amino acid supplementation, helps to maintain whole-body protein net balance, whole-body protein synthesis, and muscle mass. Studies in older adults have demonstrated that omega-3 supplementation significantly increased muscle protein synthesis rate during hyperinsulinemia-hyperaminoacidemia. This increase is likely due to the greater activation of the mTOR-p70s6k signalling pathway.
Another study found that increased omega-3 fatty acid intake reduced the loss of total body and limb fat-free masses in certain patients undergoing oesophageal cancer surgery. The mechanisms of action are not yet fully understood, but may have something to do with the anti-inflammatory properties of omega-3 fatty acids as burns, aging, and cancer are all associated with inflammation.

Case Study: In 2012, researchers at Washington University in St Louis, Missouri set out to understand how EPA and DHA affect muscle growth. 9 healthy participants age 25-45 who led a sedentary lifestyle supplemented with 4 grams of DHA+EPA daily for an 8-week period. Before and after the 8 weeks of supplementation, multiple measurements were taken.

Muscle biopsies, Hyperinsulinemic-hyperaminoacidemic clamp, where insulin and amino acids, respectively, are pumped into the bloodstream. Molecular, enzymatic, and cellular markers were analyzed…

Case Study: In a 2009 study published in the Clinical Journal of Sports Medicine, it was found that omega-3 fatty acid supplementation helped to relieve DOMS symptoms. 27 untrained men were recruited to participate in the randomized, double-blinded study. There were three groups: placebo, control and experimental (1.8 grams/day omega-3 fatty acids) The exercise used was eccentric exercise in knee extensors, and knee range of motion (ROM), perceived pain, and thigh circumference were measured before, immediately after, 24 hours after, and 48 hours after an eccentric exercise. The researchers found that omega-3 supplementation reduced perceived pain and range of motion 48 hours after exercise, however there was no difference before, immediately after, or 24 hours after exercise. These findings demonstrate that omega-3 supplementation may help to relieve DOMS post exercise.

6. The effects of ingestion of omega-3 fatty acids on perceived pain and external symptoms of delayed onset muscle soreness in untrained men
5

Are You Exercising TOO Much?