You are here: Home1 / All Articles2 / Keto Course3 / How Does Whey Protein Affect Fat Loss and Insulin – Thomas DeLau...

This Post Was All About How Does Whey Protein Affect Fat Loss and Insulin – Thomas DeLauer. 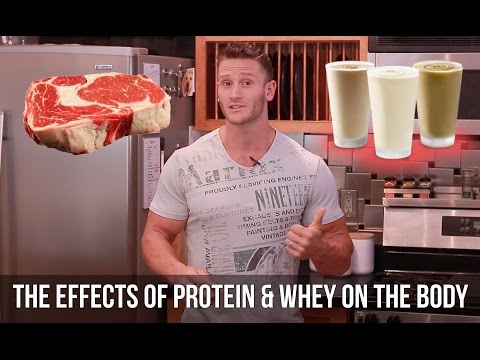 How Does Whey Protein Affect Fat Loss and Insulin:

Yep, whey protein can cause an increase in insulin, just like sugar! Learn about how it works!

How does whey protein affect insulin and fat loss? Isn’t whey a protein, not a carb??

Effect of Whey Protein on Insulin

Whey is one of the two main proteins in milk – the other is casein. Whey, like all proteins, is made up of amino acids, the building blocks of protein. When we consume protein, we then break down these amino acids and use them for muscle growth and tissue repair.

Whey contains all three BCAAs along with all of the essential amino acids.

This response does not have to do with blood sugar levels – when a food has a high glycemic index, consuming it will cause a large increase in blood sugar levels. In response to this, the body produces insulin to combat the high blood sugar and allow glucose to enter our cells for energy. This is not what is happening when we consume whey – insulin release is responding to amino acids, not glucose levels.

Insulin binds to cells to allow them to take up energy, which can be glucose or amino acids from proteins. The amino acids in whey cause an insulin release. Whey also leads to the release of GIP and GLP-1, two gastrointestinal hormones that also raise insulin levels.

This increase in insulin is actually a good thing! Whey is a fast acting protein, and the spike in insulin allows amino acids into the muscle cells to encourage repair, helping us to gain muscle and heal quickly.

Consuming whey protein has actually been shown to lower blood glucose levels when consumed during or directly before a meal. A 2005 study in the American Journal of Clinical Nutrition found that when whey was combined in a high-sugar meal, individuals with type-2 diabetes had a lower blood glucose level following the meal than if no whey was consumed. This is thought to be because the increased insulin aided the body in glucose digestion.

Generally, the better the whey, the higher the insulin spike and thus the more effective at delivering building blocks into the cells for the purpose or repair and growth.

Best to consume whey directly following exercise. It is quickly broken down and made available to muscle cells for repair post workout.

Too much protein is dangerous, so be sure not to consume excess protein. Excess protein can lead to increased fat storage and calcium loss, which can lead to osteoporosis.

1. Facts about Diabetes and Insulin

2. What is Whey Protein?

3. Effect of whey on blood glucose and insulin…

Detoxify 1000s of Chemicals From Your Body Just With Food

How Much PROTEIN Do We Really Need? MUST WATCH! Scroll to top