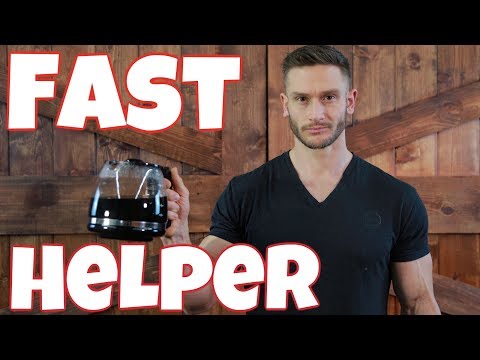 How Coffee Benefits Fasting & Keto Dieting… Thomas DeLauer discusses the positive effects of coffee on a keto diet or a fast.

In regards to fasting, coffee consumption helps promote autophagy and, as such, they’re a nice compliment of each other. A study published in the journal Cell Cycle looked to see the effects of both caffeinated and non-caffeinated coffee on autophagy. They found that both natural and decaffeinated brands of coffee similarly rapidly trigger autophagy in mice. One to four hours after coffee consumption, there was an increase in autophagy (autophagic flux) in all investigated organs (liver, muscle, heart).
These changes were accompanied by the inhibition of the enzymatic activity of mammalian target of rapamycin complex 1 (mTORC1), leading to the reduced phosphorylation of p70S6. Researchers looked to find the underlying mechanisms and found that both acute and chronic administration of coffee did reduce the phosphorylation of the mTORC1 substrate p70S6K, suggesting that this nutrient sensor is the reason for pro-autophagic signaling. Due to both caffeinated and non-caffeinated versions inducing autophagy researchers concluded that the polyphenols contained in coffee promote health by stimulating autophagy.

Coffee contains multiple polyphenols, and a range of chemically different phenolic compounds have been demonstrated capable to stimulate the deacetylation of cellular proteins, which induces autophagic activity. Specifically, “autophagy induction by coffee is linked to the deacetylation of cellular proteins as well as to the inhibition of mTORC1.” In the study, entitled Caffeine intake increases plasma ketones: an acute metabolic study in humans, Canadian researchers evaluated the effects of caffeine consumption in a group of 10 volunteers. They fasted for 12 hours and then ate a breakfast that consisted of 85g carbs, 9.5g fats, 14g protein. These individuals were then given either no caffeine, the equivalent of about a cup and a half of coffee, or a caffeine equivalent of 3 cups of coffee. Blood samples were then taken to evaluate not only the caffeine levels over a four hour period of time, but also the levels of ketones that were manufactured in the liver from the liberation of body fat. Higher doses of caffeine in the 10 healthy adults dramatically increased bHB, one of the most studied ketones as it relates to powering the brain.

The increase in free fatty acids as well as β-hydroxybuterate is explained by caffeine blocking phosphodiesterase (PDE), preventing the inactivation of cyclic adenosine monophosphate (cAMP) – with increased caffeine leading to higher levels of cAMP.

Cyclic adenosine monophosphate (cAMP) is a cellular messenger that is involved with transferring hormones such as glucagon, which is the main catabolic hormone of the body and which functions to raise both the concentration of glucose and fat in the bloodstream and has the opposite effect of insulin). Therefore, caffeine has a “negative” effect on insulin sensitivity, but not on insulin itself

Do Not Do the Gallbladder Flush if You Have Gallstones

Dr. Berg Trace Minerals: and how to use it

Smoothie Recipes For Keto | How To Make THE BEST Low Carb Chocolate Smoothie... Scroll to top