This Post Was All About How Alcohol Affects a Ketogenic Diet: Carbs- Thomas DeLauer. 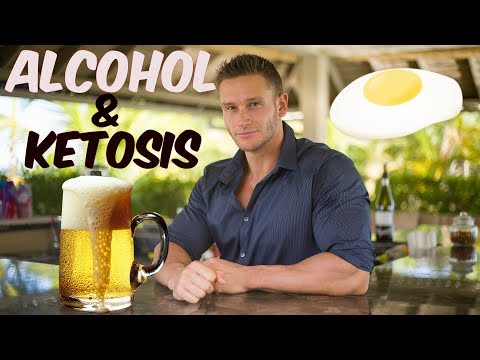 How Alcohol Affects a Ketogenic Diet: Carbs- Thomas DeLauer
Ketosis and Alcohol:
Alcohol is metabolized by several processes or pathways. The most common of these pathways involves two enzymes – alcohol dehydrogenase (ADH) and aldehyde dehydrogenase. (ALDH)
These enzymes help break apart the alcohol molecule, making it possible to eliminate it from the body. First, ADH metabolizes alcohol to acetaldehyde, a highly toxic substance and known carcinogen. Then, in a second step, acetaldehyde is further metabolized down to another, less active byproduct, acetate, which then is broken down into water and carbon dioxide for easy elimination. Acetaldehyde has the potential to cause significant damage in the liver, where the bulk of alcohol metabolism takes place. Some alcohol metabolism also occurs in other tissues, including the pancreas and the brain, causing damage to cells and tissues. Additionally, small amounts of alcohol are metabolized to acetaldehyde in the gastrointestinal tract, exposing these tissues to acetaldehyde’s damaging effects.
Drinking and Ketosis:
Not all alcoholic beverages are the same, but alcohol is the same across the board; it’s a macronutrient with seven calories per gram and a byproduct of fermentation. Essentially, a sugar compound is acted upon by yeast and the yeast produces alcohol and carbon dioxide.
Can Slow Weight Loss:
You can still drink and stay in ketosis, however, it can slow down weight loss and fat loss. The liver will start to process alcohol as quickly as possible, which means it’s used by the body before all other nutrients – alcohol will be burned off before your body resumes burning fat for energy as the alcohol you intake will start to be metabolized immediately. Having a drink means you’ll convert less fatty acids to ketones, meaning there’s less fat being burned in the process – so alcohol will temporarily reduce new ketone formation. This is because fatty acids are oxidized to make the ketones, and alcohol suppresses fatty acid oxidation. However, it’s still not the same as eating too many carbs, because it only stops the burning of fat; it doesn’t reverse the process by raising insulin levels and shifting the body into fat storage mode. As soon as the alcohol is gone, your body should go right back to burning fat.
Get Drunk Quicker:
You’ll also notice your alcohol tolerance is lower when eating a keto diet, especially if you incorporate fasting. Since someone following a low-carb diet will have their glycogen stores depleted and will be running on fats instead of glucose, the alcohol will be metabolized by the liver much faster than someone with high glycogen stores to burn through. You won’t have the carbs to soak up the alcohol.
Safe Drinks:
You need to be mindful of carbs, particularly in beer, as excessive consumption could kick you out of ketosis.
Hard alcohol:
(Not usually made with added sugars or flavorings, so it’s a good default zero-carb choice.) Tequila, vodka, etc.
Safe Chasers:
Diet tonic water, Seltzer water, and Erythritol or stevia instead of sugar
Wines:
Red: Cabernet Sauvignon (3.8 grams), Merlot (3.7 grams)
Whites: Sauvignon Blanc (2.7 grams), Chardonnay (3.7 grams)
Beer:
For beers, choose light options like:
Rolling Rock Green Light: 2.4 carbs
Natural Light: 3.2 carbs
Miller Lite: 3.2 carbs

Protein: How Much do we Really Need? | Positive Nitrogen Balances- Thomas DeLauer

Is Exercise a MUST for Keto Success?

The 5 Most TERRIBLE Pieces of Intermittent Fasting Advice

Is Your Kid a Picky Eater? Do This…

The Fastest Technique to Get Rid of Shingles Pain