This Post Was All About Healthy Dairy | Goat Cheese vs. Cow Cheese? – Thomas DeLauer. 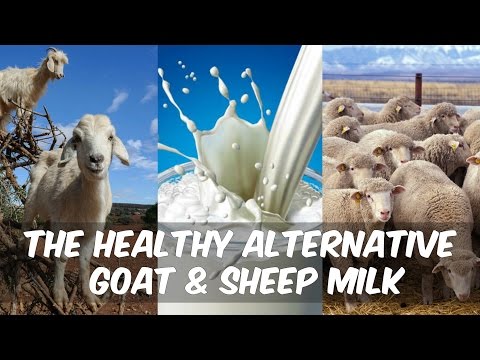 Healthy Dairy | Goat Cheese vs. Cow Cheese? – Thomas DeLauer:
The Battle of the Dairy! Is Goat Milk Healthier than Cow’s Milk? This and much more at
Many people have problems digesting cow’s milk. Symptoms include bloating, gas, stomach pain and constipation. Chronic conditions can also be tied to this, such as inflammation and diabetes. Many of those out there who have inflammatory issues with consuming cow’s milk may not even know it because they have never gone without. So, are other kinds of dairy healthier, such as goat’s and sheep’s milk? To understand this we want to first outline why cow’s milk is so hard on the body.
Why is Cow’s Milk Detrimental to Health? Lactose has traditionally been highlighted as the main culprit. More recent research points to casein, the most common protein in milk, as a trigger. The kind of casein in your milk is dependent on where you live. Beta-casein proteins make up around 30% of milk proteins and come in one of two genetic varieties: A1 and A2. A2 is the original variety that all cows used to have, with A1 appearing somewhere around 5,000 – 10,000 years ago through a mutation found in some European herds.
BCM-7 is a bioactive opioid peptide which is formed in much greater levels when we consume dairy with A1 beta-casein when compared to A2 beta-casein. BCM-7 has been linked to delayed digestion, gastrointestinal inflammation, pain and bloating. BCM-7 is speculated to play a role in diabetes, heart disease, schizophrenia and autism. A 2014 study in the World Journal of Men’s Health found that casein promoted the proliferation of prostate cancer cells. To add to the negative health effects of cow’s milk found in Europe and the US, BCM-7 is a highly addictive opioid and thus encourages people to consume more dairy than they should, and makes it hard to give up.
-Cheese is mostly made up of casein – you will often find people saying they could never give up cheese. This addictive response is so strong that is has been compared to heroine in terms of the addictive strength and the mood disorders that it causes.
Goat’s and Sheep’s Milk:
Lactose: All contain lactose, with sheep’s milk and cow’s milk similar in amount of lactose. Goat’s milk has about ¼ less lactose. Sheep yogurt has no lactose as the lactose is converted to lactic acid during fermentation. Sheep cheese has most of the lactose removed during processing. Casein: Both goat’s and sheep’s milk have A2-like beta-casein, and thus their products are less addictive and much healthier than the cow’s milk normally found in the US. Sheep produce less milk, thus it is more expensive and harder to find. Goat’s milk has also been found to prevent anemia and bone demineralization. Goat’s milk has also been found to help the body utilize minerals such as calcium, phosphorus, iron and magnesium. If you are having trouble with cow’s dairy, goat’s milk is the most readily available and nutritionally sound animal dairy to give a try.
References:
1. Milk Intolerance, Beta Casein and Lactose

2. A Milk Protein Casein as a Proliferation Promoting Factor in Prostate Cancer Cells

4. What is Casein? Foods with Casein, Casein Allergies, and More

5. What is a Casein-Free Diet?

The Longest Fast in the World

How to Increase Autophagy withOUT Fasting

8 Reasons Why You Should Eat More Sauerkraut