This Post Was All About Hair Loss: Top 3 Natural Foods to Slow Balding- Thomas DeLauer. 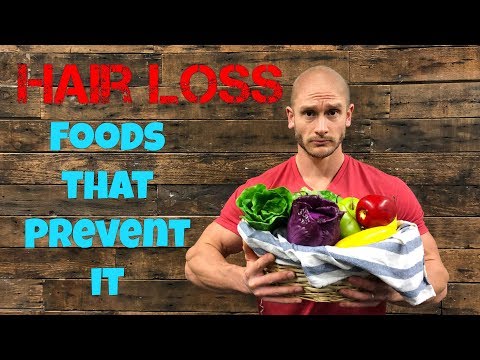 DHT:
Dihydrotestosterone, or DHT, is a natural but powerful metabolite of the human body and the main cause of hair loss in both men and women. It’s a chemical derivative of testosterone, created when the metabolism of androgen gets involved with an enzyme called 5-alpha-reductase. It’s formed primarily in the prostate gland, testes, adrenal glands and hair follicles and is important in early stages of development (1) DHT creates an acceleration of the life cycle of the hair, which results in a miniaturization effect on the hair and follicle. Also affects the skin by suffocating the hair follicles, cutting the blood circulation, and making it difficult for the body to deliver essential nutrients for healthy hair growth.

Saw Palmetto:
Saw palmetto is a natural remedy used to treat hair loss – it’s a plant with small berries that has been used by Native Americans as medicine and food for hundreds of years. It’s believed to work by blocking 5-alpha-reductase, the enzyme that converts testosterone to DHT (2)

Studies:
In a 2002 study on ten men with androgenetic alopecia – male pattern baldness – there was an improvement in 60% of the participants. In a study from 2004, 34 men and 28 women received topically applied saw palmetto extract on the scalp. 67% saw a reduction in scalp sebum production and 35% experienced increased hair density (2)

Pygeum:
Pygeum is an extract from the bark of Prunus Africana known in English as the African Plum Tree and has become popular in the last decades due to studies showing its anti-androgenic effects. But it’s believed have a 5 alpha-reductase (5AR) inhibiting mechanism due to the isolated N-butylbenzene-sulfonamide (NBBS) compound in pygeum, which is a specific AR antagonist (3)

2,559 patients suffering from BPH and following a various set of treatments were compared with patients that were simply supervised without following any treatment. The treatments followed by the first group included: finasteride, saw palmetto, tamosulosin, and pygeum. After a year, there was a significant improvement registered for the group that received treatment when compared to the untreated group but the results varied according to the type of treatment received. Those who were taking a treatment involving pygeum had 43.3% improvement, comparable to the results for finasteride (57% improvement). Also, the patients that were receiving pygeum africanum had a slightly better improvement rate when compared to those who were treated with saw palmetto (42.7 %). (3)

Magnesium:
*Part of DHT’s effect on hair loss is due to the prevention of nutrients and minerals getting to the hair follicles – magnesium seems to work by help counteract that. The studies done, though, are with magnesium L threonate* However, as Mag Threonate (from what I can find) is the only form of magnesium that can pass through the blood brain barrier, that is the only form that can directly inhibit DHT (4)

Study – Magnesium L Threonate:
Created by taking a sugar that comes from a vitamin C metabolite – called L threonic acid – and combining it with magnesium. In this form, it has the ability to cross the blood-brain barrier, which is rare for supplemental forms of magnesium. A South Korean University way back in 2010 conducted a study in which they looked at the side effect L threonate would have on cultured dermal papilla cells or DPCs. In the study, when the L threonate was added together with DHT in the cultures, the DHT was found to be “significantly repressed.” Implies that L threonate is able to turn off or reduce the expression of the genese DKK1 (dickkopf-1), which means it can reduce the effect of the DHT on these cells (5,6)

1) The Belgravia Centre. (n.d.). Retrieved from

4) Magnesium for Hair Growth and Care. (n.d.). Retrieved from

5) Magnesium L Threonate Hair Loss Benefits Might Be For Real. (2017, October 6). Retrieved from

Common Nutrient Deficiencies Caused by Drugs that You Should Know About

5 Things that Make You Susceptible to an Infection

Live Q&A: Keto and Fasting for Beginners (bring your questions!)

Live Q&A How Carbs Turn into Fat – Tune in Now

The Best Vitamin for Sciatica