This Post Was All About Fatty Acids | Boost Omega 3’s | Omega 7: The Forgotten Fat- Thomas DeLauer. 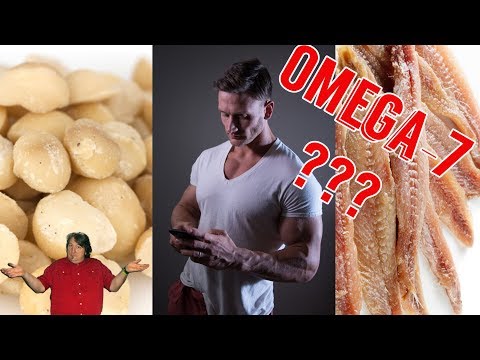 Fatty Acids | Boost Omega 3’s | Omega 7: The Forgotten Fat- Thomas DeLauer…
Omega-7 fatty acids:
● Monounsaturated fatty acids
● Found in macadamia nuts, cold-water fatty fish (salmon, sardines, tuna, trout) and sea buckthorn berries (a fruit).
● Palmitoleic acid is a type of omega-7 fatty acid that has been shown in many studies to be good for our health
● Acts through many pathways to prevent disease
○ Acts as a lipokine, a hormone-like molecule, to promote proper metabolism

Metabolic syndrome is a group of risk factors that raise your chance of diseases such as heart disease, type-2 diabetes and stroke. These risk factors include:
1. Abdominal fat – having a large midsection
2. High triglycerides
3. Low HDL level
4. High blood pressure
5. High blood sugar

**Best study** A study published in the Journal of Clinical Lipidology in 2014 conducted a randomized, placebo-controlled study of palmitoleic acid supplementation versus a placebo on subjects with systemic inflammation and dyslipidemia for 30 days. The results were impressive! As compared to the control group, the experimental group:
● Reduced C-reactive protein (a marker of inflammation)
● Decreased triglycerides
● Decreased LDL
● Increased HDL

Type-2 diabetes is a cluster of metabolic diseases that results from problems with insulin secretion and/or action.

Different fatty acids have been found to have differing effects on glucose and lipid metabolism as well as insulin sensitivity.

Palmitoleic acid has been found to:
● Prevent beta-cell apoptosis (cell death of insulin-producing cells) that is caused by glucose and saturated fats
● Improve plasma lipid profile (beneficial for both heart health and diabetes)
○ Human study: One study took mildly hypercholesterolemic men and women and compared a control group with a group that consumed macadamia nuts for 5 weeks. Compared to the control group, the experimental group experienced a reduction of both total and LDL-cholesterol levels.
● Functions as an adipose tissue-derived lipid hormone, stimulating insulin action in muscle cells and suppressing fatty liver disease
○ What this means is that muscle cells use palmitoleic acid to communicate with organs, regulating systemic metabolic homeostasis

Studies above showed the ability to raise HDL and lower LDL.

A 2013 study on rats found that consuming palmitoleic acid, as compared to other kinds of fats and a control, led to decreased food intake.

In this study, consumption of palmitoleic acid was found to increase the levels of a hormone linked to satiety called cholecystokinin.

5. Identification of a lipokine, a lipid hormone linking adipose tissue to systemic metabolism

7. What is metabolic syndrome?

8. Purified palmitoleic acid for the reduction of high-sensitivity C-reactive protein and serum lipids…

9. Oral administration of omega-7 palmitoleic acid induces satiety and the release of appetite-related hormones in rats
3

THE ULTIMATE IIFYM FAST FOOD CHALLENGE Drive Thru Restaurants ONLY

How to Fix Bad Posture Quickly Scroll to top