You are here: Home1 / All Articles2 / Keto and Fasting3 / Fathead Pizza Recipe For Keto | How To Make The BEST Low Carb Gluten Free...

This Post Was All About Fathead Pizza Recipe For Keto | How To Make The BEST Low Carb Gluten Free Fat Head Pizza Dough. 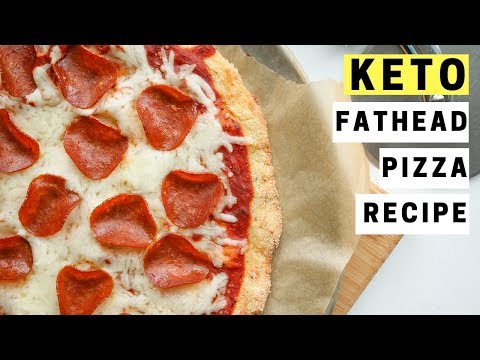 This is THE BEST Fathead pizza recipe! Learning how to make low carb fathead dough is a keto game changer, and this fat head pizza is proof of that. That’s because fathead pizza dough bakes into a crust that tastes almost identical to the “real thing”. Seriously low carb keto pizza does not get better than this, and it’s gluten free too.

Preheat your oven to 425 degrees.
While you’re oven is preheating, in a medium sized bowl add the cream cheese and 1 1/2 cups of the mozzarella, and microwave for 20-45 seconds depending on the power of your microwave.
Remove the bowl from the microwave, mix and combine the two cheeses together.
Microwave another 20-45 seconds.
In a larger bowl add the egg, and whisk it.
Then add the cheese mixture from the other bowl, and the almond flour as well.
Combine all the ingredients with a spatula until a ball of dough forms.
When it does coat you work surface in 2ish Tbsps almond flour, and add the dough.
Coat both sides in the flour, and then use your hands to press out the dough into the shape of a circular pizza crust.
Once the pizza dough is about 8 inches in diameter transfer it to a pizza pan lined with parchment paper.
Continue to press out the pizza dough on the sheet until it’s about 10 inches in diameter.
Then use a fork to score the top of the (doing this will reduce bubbling of the dough)
Bake for about 10 minutes, or golden brown, and pop any bubbling with a fork during this time.
Remove from the oven and add the sauce, and toppings.
Bake for another 5 minutes (or until the cheese melts) with the topping.
Remove from the oven, cool and cut the pizza!

What Would I Do If I Had MS (Multiple Sclerosis)

How to Get Rid of Sunspots on Your Skin

How to Avoid a Silent Stroke

How to Break a PROLONGED Fast (Protein, Fats and Carbs) – Full Guide

Messed Up on Keto: Now What… Scroll to top