This Post Was All About Dr. Berg & Professor Timothy Noakes on the Ketogenic Diet & Exercise Myths. 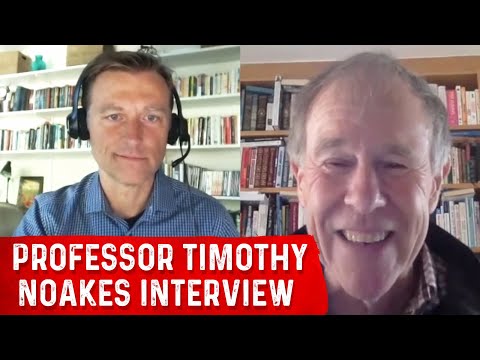 Dr. Eric Berg interviews Professor Timothy Noakes on various myths on exercise, drinking water and consuming carbohydrates. If you are drinking too much water, you could end up depleting your sodium levels and creating a condition called hyponatremia and could even die. Its important to drink based on “thirst”. A high carbohydrate diet is not recommended to athletes because of the amount of damage it creates in the arteries and other tissues.

Professor Noakes: I have to think it’s Thursday.

Dr. Berg: Okay got it, great! So, I want to first talk about you at one point promoted the high carb diets for awhile right? Tell me a little bit about that and then, I think what change your mind?

Professor Noakes: So I started running in the late 1960’s early 70’s and I started my physiology training in mid-1970 and that was one of the first years that the new theory arrives that muscle glycogen, carbohydrates in the muscle was the single effect to determining the athletic performance and that is how it was projected to all of us. So I am a young student studying physiology in medicine and I am running marathon and I discover this, this is the most exciting piece of information that I heard in the whole medical training. So I was started promoting this high carbohydrate diet in early 1970’s and I have been coursed adapted to that diet and I went to complete my medical training, I was surrounded by cardiologist. It was them telling us if you eat fat, you are gonna die. So I was gonna eat lots of carbohydrate and It was gonna make me run better well in fact, it made me run worse and I got fatter and progressively sicker. And then in 1981, my father was diagnosed with Type 2 Diabetes and he died 10 years later. And eventually I discovered that I also had type 2 diabetes and I realized that I got 10 years to solve this problem out unless I am gonna die like he did. And that fortunately forced me to look very seriously into the what is going on and the evidence and I came across the book called “The New Atkins for the New You” written by Dr. Westman, Volek and Phinney and within two hours of reading that book I said, “Oh My Gosh, I am completely wrong for 33 years.”

Why Is Diabetes Becoming So Popular Nowadays

The Health Benefits of Citrus