This Post Was All About Dr. Berg Interviews Zach Bitter, US Record Holder of 100 Miles (Ultra Marathon). 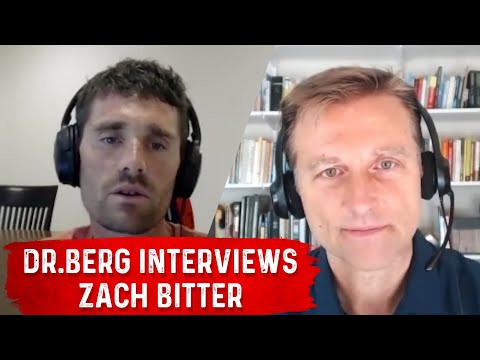 Dr. Berg: Hey guys I have an exciting guest, Zach Bitter is here. Zach is an endurance athlete.. Ultra endurance athlete, he runs 100 mile, i mean incredible. World and american record holder. Thanks for doing this Zach and welcome to my little interview here.

Zach: Yea.. Thank you for having me on.

Dr. Berg: Absolutely. Now Zach is gonna be one of our speakers guys at the summit. So I’m really excited to take his brain and find out how the heck he runs a 100 miles and not only just running 100 miles but taking the record and also you actually, this in america right but in the world you’ve taken some records too right?

Zach: Yea I have an American record for 100 miles and that’s just the time it takes to run 100 miles, and that’s 11 hours 40 minutes and 55 seconds. I also was able to kind of double dip a bit with that. Sells up a world record which is a distance run in 12 hours. So I’ve run a 100 and 1.7 miles than a 12 hour time frame. So ultra running communities goody enough were they have distance races and timed event races and all kinds of other things. So it’s a.. that’s kind of where I’ve been my niche has the last few years.

Dr. Berg: Wow. couple of things I want to know like that’s, this is like a set on average 7 minute mile right?

Dr. Berg: So that’s like you’re trackin’ and you are not like jogging slowly. You have a really good pace and then how do you know when you have to like do you just go by thirst and hunger like how do you know if you have to eat or drink before you kind of like i’m gonna pass out.

Zach: yea – It’s interesting i guess you know that’s definitely been something that’s changed for me like before I had ever done a 100 mile race I done a whole bunch of 50 mile races and one thing I kind of noticed was in order to kind of feel decent or feel like I wasn’t gonna kind of crash and burn, I would have to tons and tons of carbohydrates like to the tune of 400 calories and hour and a lot of it is pretty simple because you know you’re moving so it’s hard to take in a complex energy source set during the exercise and that kind of catches up to your gut is still trying to process all that and your body needs the energy presumably but your gut has to also handle it. Well one thing I noticed is like by the end of those races you just kind of feel bloated and kind of disgusting and it was like you know kind of a question in the back of my mind I was always like well how do you do that for 50 more mile or you know further yet and you know that wasn’t the only thing I which kind of led me to a different approach but you know, what I do now I mean since following a high fat approach is I can get away with a lot less fuel while I’m running because I’ve essentially tapped into a much larger fuel tank which is a body fat.

Allergic to Water (Aquagenic Pruritus)? DO THIS

Are Whole Grains Destroying Your Brain?