You are here: Home1 / All Articles2 / Keto Course3 / Do You Have Adrenal Fatigue? Top 3 Causes

More specifically, you want help with Do You Have Adrenal Fatigue? Top 3 Causes?

This Post Was All About Do You Have Adrenal Fatigue? Top 3 Causes. 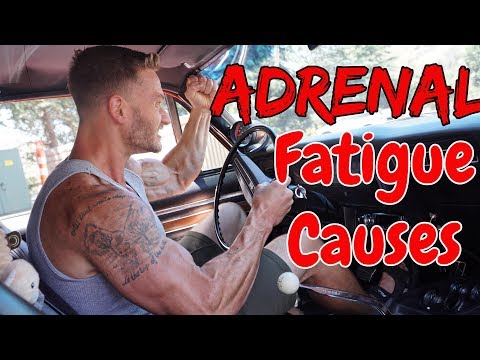 Do You Have Adrenal Fatigue? Top 3 Causes – Thomas DeLauer

What do the Adrenal Glands Do?

Your adrenal glands are two small, walnut-sized endocrine glands situated on top of your kidneys.

Your adrenal glands are made up of two parts: the adrenal cortex and the adrenal medulla.

The adrenal cortex is responsible for producing vital hormones, including cortisol, hydrocortisone, aldosterone, testosterone, and estrogen.

Corticosteroid hormones are one class of hormones produced by the adrenal cortex.

When you experience a stressor, your hypothalamus produces corticotropin-releasing factor (CRF) which stimulates adrenal corticotropic hormone (ACTH) release from the pituitary gland. ACTH is what queues the adrenal glands to produce these hormones.

The hormones released by the adrenal medulla are released after the sympathetic nervous system is stimulated and include epinephrine, also known as adrenaline, and norepinephrine.

Hormones and the Natural Stress Response

When we experience stress, our brain sends signals and hormones are released.

Norepinephrine is involved as well at this initial stress response moment. This hormone plays a similar role and helps to increase how alert and aware you are, as well as helping to shift blood away from areas not crucial to the immediate response to stress and to areas like our muscles.

Next, often minutes following the stress, cortisol kicks in.

Cortisol increases glucose in the bloodstream for immediate energy needs, enhances the brain’s use of glucose, and plays a role in boosting substances that repair tissues.

Cortisol also slows down functions not considered essential in a fight-or-flight situation. These include suppressing digestion, reproductive system, growth processes, and immune response.

Cortisol is known to impact brain regions that control feat, motivation, and mood.

Following a stressor, our hormone levels return to normal. This reduces the effects of these hormones on our bodies – think about it – we don’t want impaired immune system function, digestion, and blood sugar continuously.

Chronic stress can lead to our bodies eventually not producing enough of these hormones. The exact mechanisms here are still being studied, however research emphasizes the importance of cortisol regulation and the hypothalamic-pituitary-adrenal (HPA) axis in the regulation of the cardiovascular, immune, endocrine, vascular, and neurologic systems (1).

How Chronic Stress may Lead to Hypocortisolism

Current theories on how chronic stress could lead to hypocortisolism include:

Elevated cortisol levels for extended periods of time can damage the brain.

Hellhammer and Wade have hypothesized that, in situations where the HPA axis has been over-active for long periods and there has been excess cortisol secretion, that the body may over-compensate by reducing the levels of cortisol such that hypocortisolism may occur in order to protect the brain (1).

In animal studies it has been found that excess release of CRF can lead to downregulation of CRF receptors at the pituitary gland.

It is postulated that prolonged cortisol release may lead to an increase in the sensitivity of the HPA axis to cortisol and negative feedback controls, leading to hypocortisolism.

While the mechanisms are still being researched, chronic stress is tied to hypocortisolism and a wide variety of diseases, so understand what leads to adrenal fatigue and how to combat it are important for everyday health and wellbeing.

The Best Stretch for Sciatic Pain

Elderberry vs. Illness- Does it Help?