This Post Was All About Cooking Keto Breakfast Recipes from our Aldi Grocery Haul – Part 2 with FlavCity. 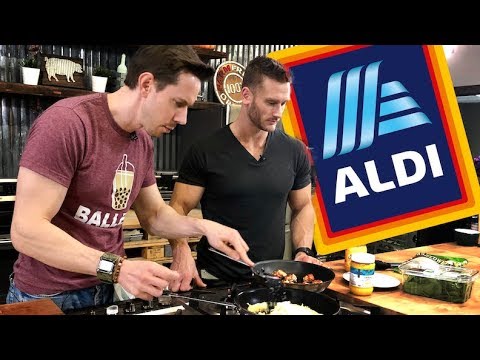 Did You Miss PART 1 at the Grocery Store??

How to Shop the Meat Department of Your Grocery Store:

We went to Aldi, and we got a bunch of different breakfast items so that you don’t have to just be eating good old fashioned bacon and eggs anymore. Hey, I’m here with Bobby Parrish from Flav City, and we’re going to have some awesome fun cooking up what we got from our Aldi breakfast grocery haul. Hey, I want to make sure before you go any further that you go ahead and hit that red subscribe button, and then hit that little bell icon to turn on notifications and Bobby, tell them where they can find you.

Well, why don’t we come together and get kicked out of some grocery stores together, make a bigger scene, which we did.

That’s right. Which we did.

So fun fact, this is part two. So if you haven’t seen part one, we went to the grocery store, we went to Aldi and we had some fun, we taught them what to get. You dropped some knowledge in terms of the ingredients. I dropped some knowledge in terms of what happens inside your body with those foods. And then we also did a video at Costco, which is going to be on your channel.

Yep. Part one. It’s the first time I’ve ever been kicked out of Costco. This is private property, you guys can’t be filming inside the store. Attribute that to Thomas, so thank you Thomas.

When worlds collide, when two people that normally go to grocery stores and occasionally get kicked out, come together. Well, we definitely get kicked out. So anyway, without wasting any of your time, what are we making? What’s going to happen here is Bobby is a really good acclaimed chef. Like he’s just awesome. So he’s going to show me how to cook up some of these inexpensive budget items we got at Aldi. He’s going to show me how to make them, and then I’m going to just yap my mouth about science and what’s going on in your body, because that’s just the way to go.

Sweet. That’s awesome. If you watch our haul video, you never would have known that we’re going to be making this much amazing food off of the basic stuff we got from Aldi. It’s so cool.

All right, well where are we going?

All right, we’re going to first blend up the ingredients for the Starbucks egg bites. So we have five eggs. I’m just going to drop them in the processor here.

Now again, you said from the Aldi video, if you watch the part one, we went with the best option that we could get there, which they don’t have the full blown pasture raised eggs. But they have a pretty close second in this particular case. And best of what you’re going to get for Aldi. Now, so you’re using the whole egg here?

Okay. So if you’ve watched my channel before I do talk. If you’re doing keto, one thing that you can do, we’re not going to do it in this video just because we don’t want to screw it out with the recipe too much. But have you ever played around with actually just using the yolk in a recipe like this?

I haven’t, but I’m curious to see what you’re going to say about that.

So what’s going on is, believe it or not, it’s the white that has most of the antibodies and the immune system components for growing the chicken and the egg, right? So when we as humans consume the white, that’s what could potentially cause any kind of inflammatory reaction. Not saying it does, but if you are sensitive to eggs, it might be more than likely is the white, not the yolk. So you also want that nice fat to protein ratio on keto. So go ahead and have the yolk. That’s all the good stuff.

You guys, thank you so, so much for being a part of this. And if you haven’t already, if you just tuned in here for the recipe video, you’ve got to go back to video one and watch the Aldi grocery haul, so you can hear all the ingredient knowledge and science behind why we pick what we pick at the store.

Does ONE Calorie Stop Autophagy and Wreck a Fast?

Too Scared to do Fasting (or Intermittent Fasting)?

Residual Brain Fog From COVID: DO THIS…

How to Get Your Thyroid to Work Correctly Scroll to top