You are here: Home1 / All Articles2 / Keto Course3 / Coffee vs. Fat Loss | Should You Add Fat to Coffee | Keto Coffee Benefits-...

This Post Was All About Coffee vs. Fat Loss | Should You Add Fat to Coffee | Keto Coffee Benefits- Thomas DeLauer. 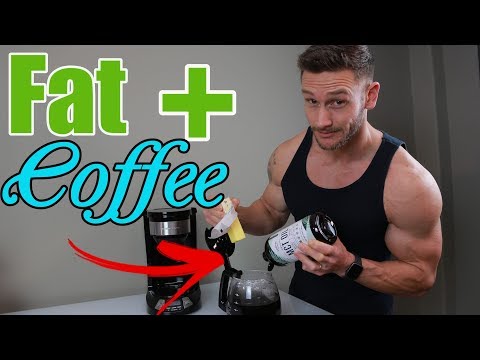 Slowed Caffeine Release:
It’s hypothesized that since fats take time to break down, it results in a slow release of caffeine. If you drink black coffee, or coffee with milk, all of the caffeine gets released almost immediately – that’s when you get the caffeine jitters. It’s claimed that “the act of blending the coffee breaks the fats into micelles, which bind to caffeine molecules.” From there, they’re all broken down together at the pace of the slowest part of the molecule – in this case, the fats.
Note: it’s been stated that there’s nothing to back this up, and as of right now, is just hypothesized.

Study – Zeitschrift für Gastroenterologie (Z GASTROENTEROL):
Liquid is the overall best caffeine delivery method with the most caffeine being absorbed in the least amount of time to fully saturate blood plasma. The effects of caffeine gum are quicker, but less caffeine is absorbed overall – an advertised 100mg caffeine piece of gum would really only deliver 77mg of caffeine (see chart below). Caffeine capsules and tablets take the longest to fully saturate the blood since they have to dissolve in the stomach first. As mentioned, it’s believed that drinking caffeine on an empty stomach provides faster absorption than drinking caffeine with food or after eating. There was some research into this notion and it was found that the rate of stomach emptying did speed up or slow down blood saturation rates. People with full stomachs, especially those given a high fiber (hard to digest) meal had slower caffeine absorption rates. The effect of altered gastric emptying on caffeine absorption (tablets; 366.1 mg) was studied in patients with gastric stasis or after Billroth II partial gastrectomy with adequate gastric emptying and in healthy subjects with slowed gastric emptying due to a fibre-free and a fibre-rich liquid test meal of an elemental diet, respectively. Compared with controls (n = 15), a significantly slowed caffeine absorption was found in gastric stasis (n = 8) by means of a lower absorption rate constant KA (0.018 +/- 0.007 vs. 0.122 +/- 0.110 min-1 in controls) and a prolonged peak time tmax (160 +/- 77 vs. 46 +/- 19 min). Similar results were obtained after a fibre-free and a fibre-rich liquid test meal, respectively. Simply, those given a high fiber meal did have slower caffeine absorption rates, but the mechanism behind this is still hypothesized (above).

Gut Health:
You have four families of bacteria in your gut: Firmicutes, Actinobacteria, Proteobacteria Bacteroidetes. Their relative balance has a lot to do with whether you gain or lose weight because they cause you to excrete FIAF (Fasting Induced Adipose Factor). As a general rule, a high fat, high carb diet leads to more Firmicutes, and reduces Bacteroidetes. In a studies conducted in obese and lean twins, it has been shown that Firmicutes were dominant in the microbiomes of obese subjects, which were also enriched with genes known to be associated with nutrient transporters, while a higher relative abundance of

Bacteroidetes and an enrichment of genes linked to carbohydrate metabolism was found in microbiomes of lean twins. Simply, Firmicutes is associated with weight gain, and Bacteroidetes is associated with weight loss. Fasting Induced Adipose Factor is made in your liver – one of FIAF’s functions is to block an enzyme called lipoprotein lipase which tells your body to store fat.

What Fast Food Can You Eat on Keto?