This Post Was All About Coffee causes Insulin Resistance (Don’t Panic). 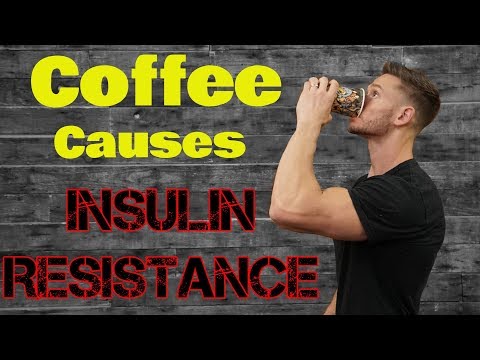 Caffeine or a placebo was administered intravenously to 12 healthy volunteers in a randomized, double-blind, crossover design – glucose clamps were used to assess insulin sensitivity

Caffeine decreased insulin sensitivity by 15% vs. placebo
After caffeine administration, plasma FFAs increased and remained higher than during placebo

Adrenaline is a key hormone in the ‘fight or flight’ response, whereby it stimulates the liver to release glucose into the bloodstream in the case that we need quick energy

It does this via two physiological processes; glycogenolysis and gluconeogenesis – the liver breaks down stored glucose in the form of glycogen, and it also breaks down non-glucose sources of energy such as fat sources

In other words, and similarly when stressed, the body prepares itself by ensuring that enough sugar or energy is readily available

Note: Can decrease insulin sensitivity, but does not have an effect on insulin signaling

This might seem like a bad thing considering we want increased insulin sensitivity, but it’s actually beneficial

If insulin levels are high, it inhibits the exact mechanisms of fat burning that caffeine is stimulating

So as a result, our body finds a way to allow for fat burning to occur by becoming temporarily insulin resistant

In a state of impaired insulin sensitivity, insulin can’t bind to its receptor properly which prevents it from triggering its anti-fat-burning effects

Caffeine increases adrenaline, which increases lipolysis – an increase in free fatty acids shooting around your body causes a subsequent, but necessary, drop in insulin sensitivity to allow you to actually burn the fat

A study led by Harvard School of Public Health (HSPH) researchers, the journal of the European Association for the Study of Diabetes
Analyzed data on 126,000 people over 18 years in regards to coffee and caffeine consumption,

Results showed that participants who increased their coffee consumption by more than one cup per day (median change=1.69 cups/day) over a four-year period had a 11% lower risk of type 2 diabetes in the subsequent four years compared to those who made no changes in consumption

How to Test Yourself for Adrenal Fatigue

What To Do For “Normal” Childhood Infections

Why Do You Get Varicose Veins?