hi guys dr. Burke here in this video we’re going to talk about viruses in relationship to trace minerals now trace minerals are those minerals that are not needed in large amounts like for example manganese potassium even calcium is needed in large amounts but selenium zinc copper is needed in smaller amounts usually below 100 milligrams and so trace minerals have many different purposes but they’re they’re involved in the formation of proteins and they’re also involved in the formation of enzymes in the body okay but trace these trace minerals are really good to deactivate the viruses and put them back over mission stop the reproduction of viruses so selenium is is really important selenium is also good for the liver it’s also good to convert t4 to t3 the active form of thyroid hormone so if there’s a thyroid issue this is one mineral that you you need to take zinc is kind of a common mineral that a lot of people already know will help they’re cold but it’s really good in deactivating rhinoviruses which are the viruses and the sinuses that keep the person’s nose running all the time so this is really good also for a sore throat so it’s good for bacteria and then we have copper now copper is interesting copper actually is part of the vitamin C complex copper is necessary also for collagen formation if you’re deficient in copper you can get a swayback or that your lower back curve becomes exaggerated it goes in too much if the if at birth you are your your mother is deficient copper you can get that that’s because the copper is involved in the formation of proteins ligaments and tendons in collagen as well so but it’s really good to take for certain type of viruses then we have manganese okay that’s different than magnesium and this is also another trace mineral that will help put the virus in remission and also as a side note if a female is carrying this baby and she’s deficient in manganese the child could end up with flat feet so there’s a connection between fallen arches and manganese okay so these trace minerals are really important in a lot of different other aspects as well now calcium is not a trace mineral but it’s just a regular mineral it needs you need it in large amounts but I want to just bring it in here because I have been very successful in if a child has a fever and it’s viral related and it doesn’t respond to antibiotics because viruses don’t respond to that if you give the child calcium okay calcium citrate calcium magnesium magnesium I have found that you can knock out a fever if it’s viral related within ten minutes okay so it’s a really good thing to put that virus back in remission so now the question is how do you become deficient in a trace mineral right good question well number one our soils our soils are depleted the farmers don’t put the trace minerals back into the soil so if the if the soil doesn’t have the trace mineral the plant your food will not have the trace mineral in it either gastric-bypass if you’ve had that done that procedure then you’re going to have a problem with your absorption of trace minerals and that leads us to the next one low stomach acid this is probably a very common issue as you get older you lose your stomach acids stomach acid is necessary in the absorption of trace minerals if you do or regular minerals to even iron and calcium so if you’re low in stomach acids then you’re not going to pull these trace minerals in so that could be the root cause of it so now the question is how do we know for a low and stomach acid well some of the common symptoms would be gas indigestion bloating okay even heartburn the food sister to long those are all signs of low stomach acid in which case you would want to take something called betaine hydrochloride or apple cider vinegar okay and I’m going to show you this is a my trace mineral that I have and what’s unique about this trace mineral blend it’s a liquid and it’s plant-based okay it’s actually seventy million years old from the prehistoric dinosaur age they had they found that the vegetation in the layer of that earth was all just really great observable trace minerals that are very different than sea minerals or salt minerals or metallic minerals so these are 15,000 times smaller than regular minerals so it’s a hundred percent absorption you put in some water you don’t even taste it it goes in and it starts to fortify any type of missing element that you’re you don’t have in your body now it’s not necessarily for energy it’s mainly to help you provide what’s missing for the protein so you might see really good improvements in your nails your skin your hair but it can also build up your reserve of trace minerals as well alright thanks for watching

This Post Was All About Can Trace Minerals Inactivate Viruses?. 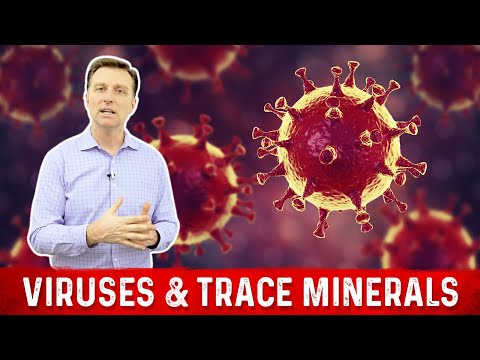 The thyroid needs selenium to convert T4 to T3. If your stomach is low in stomach acids, you can have a difficulty to absorb trace minerals. Having a gastric bypass procedure can also inhibit your trace minerals absorption. And our soils are depleted soils can also be the reason why you are deficient in trace minerals.

http://www.sciencedirect.com/science/…
Dr. Eric Berg DC Bio:
Dr. Berg, 51 years of age is a chiropractor who specializes in weight loss through nutritional and natural methods. His private practice is located in Alexandria, Virginia. His clients include senior officials in the U.S. government and the Justice Department, ambassadors, medical doctors, high-level executives of prominent corporations, scientists, engineers, professors, and other clients from all walks of life. He is the author of The 7 Principles of Fat Burning, published by KB Publishing in January 2011. Dr. Berg trains chiropractors, physicians and allied healthcare practitioners in his methods, and to date he has trained over 2,500 healthcare professionals. He has been an active member of the Endocrinology Society, and has worked as a past part-time adjunct professor at Howard University.

When to Take Probiotics During Fasting (Do They Break a Fast?)

The Best Foods to Clean Out Your Arteries

How to Get Rid of The Last 10 Lbs of Fat

That SHREDDED Diet Ep.10 – Full Day Of Eating While Cutting | What I Eat... Scroll to top