You are here: Home1 / All Articles2 / Keto Course3 / Best and Worst Forms of Dairy on Keto

Best and Worst Forms of Dairy on Keto

More specifically, you want help with Best and Worst Forms of Dairy on Keto?

This Post Was All About Best and Worst Forms of Dairy on Keto. 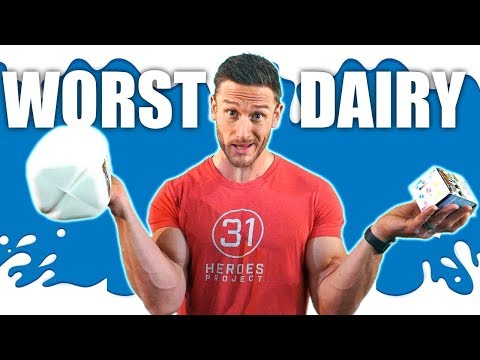 Best and Worst Forms of Dairy on Keto – Thomas DeLauer

Beta-casein proteins make up around 30% of milk’s proteins and comes in one of two genetic varieties: A1 and A2

A2 is the original variety that all cows used to have, with A1 appearing somewhere around 5,000 – 10,000 years ago through a mutation found in some European herds

The study examined the effects of various forms of milk and 0.15 M NaCl (control) on gastric-acid secretion in five patients with duodenal ulcer during a period of remission and in five normal subjects

A significant increase in acid secretion in both groups was produced by 240 ml of whole, low-fat, and nonfat milk

Ghee, a type of clarified butter, which is a fancy term for pure butterfat – while it has similar properties to regular butter, ghee is like an upgraded version with a richer taste, higher smoke point, deeper color, and more nutrients

Concentrate: This is the least processed form of whey there is, which means it’s the cheapest form, the form that contains the most additional non-protein stuff (most notably lactose and fat), and the form with the most potential to cause digestive issues (due to that aforementioned lactose)

Isolate: This is what you get when you take whey concentrate and filter out the vast majority of the stuff that isn’t protein, thus leaving you with a much more pure (i.e. more protein per scoop), easily digestible (bye-bye lactose), and expensive form of whey

When healthy bacteria (S. thermophilus and L. bulgaricus) are added to milk and allowed to ferment, the fermentation process leads to changes in the bioavailability of nutrients found in the final product

As the pH decreases, both phosphorus and calcium are converted into their soluble forms, the proteins become calcium free and more easily digested by proteolytic enzymes, making them more bioavailable

During the production of Greek yogurt, regular yogurt is strained multiple times to remove the whey

Heavy cream is the thickest cream of them all and has a minimum of 36% milk fat – Per half cup, it contains about 414 calories and 28 grams saturated fat.

Light cream (aka coffee cream) has about 20% milk fat and is primarily used in coffee, although it can also be used for baking and in soups – it has about 350 calories per cup and 23 grams saturated fat.

The process starts with curdling milk – this is done by adding an acidic substance like lime juice or vinegar to warm milk.
When the acidity of the milk increases, curds of casein protein separate from the whey, the liquid part of the milk

After the curd is formed, it is gently cut into pieces that allow additional whey to drain from the curds

Half-and-half is exactly what it sounds like, equal parts whole milk and light cream – it contains about 12% fat, which makes it richer than whole milk (which contains 3.5% fat), although less rich than light cream

Sour cream, also called cultured sour cream is made by adding a culture of Streptococcus lactis to pasteurized light cream and incubating at 72˚F until the desired flavor and thickness is reached

Why Are My Feet Shrinking on Keto (Ketogenic Diet)?

What is Coconut Oil Fasting? Fat Fasting as a Diet Reset

How Long Before a Diabetic Goes Blind?