You are here: Home1 / All Articles2 / Keto Course3 / Apple Cider Vinegar vs. Coconut Vinegar- Which is Healthier? Thomas De...

This Post Was All About Apple Cider Vinegar vs. Coconut Vinegar- Which is Healthier? Thomas DeLauer. 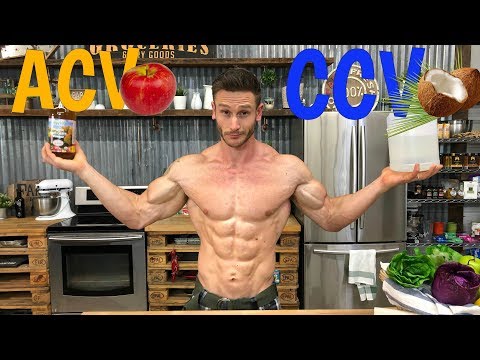 Click Here to Subscribe:
Website:
Apple Cider Vinegar vs. Coconut Vinegar- Which is Healthier? Thomas DeLauer
Similarities:
Acetic Acid and Fat Loss-
The main mechanism by which acetic acid intake suppresses body fat accumulation is believed to be due to the up-regulation of fatty acid oxidation.
In one study, researchers analyzed for SREBP-1, an enzyme that regulates gene expression of lipogenic (fat manufacturing) enzymes and PPARalpha, a gene that regulates fatty acid oxidation, in the liver, where almost all acetate in the portal circulation is metabolized. Researchers found that PPARalpha gene expression in both the high and low-dose groups was significantly upregulated.
Uncoupling protein 2 (UCP2), which plays a role in thermogenesis (metabolizing fats to produce heat) was also elevated (2)
Glycemic/Insulinemic:
Acetic acid is able to reduce glycemic and insulinemic responses to foods, such as a starchy meal, by delaying gastric emptying. cetic acid has been shown to decrease the activities of a number of intestinal glucose transporters and disaccharidases (digestive enzymes that break down disaccharides into their two constituent sugars; sucrose, for example, is broken down into fructose and glucose by sucrase, a disaccharidase)
In studies, acetic acid has been shown to inhibit sucrase activity and been shown to cause a decrease in maltase and almost a complete inhibition of trehalase and lactase. Moreover, acetic acid also inhibits the activity of angiotensin-converting enzyme (ACE) – ACE inhibitors have been shown to have anti-inflammatory effects (3)
Potassium:
Coconut vinegar: 10,300mg/L
ACV: 90mg/L
Potassium and sodium both perform many of the same body functions, such as muscle contraction and fluid balance, however they do so in an opposing manner. Sodium draws fluid out of the cells, increasing blood pressure, while potassium draws fluid into the cells, decreasing blood pressure – regulate blood flow and control the level of fluid inside and outside cells which maintains proper fluid balance in your tissues.
Magnesium:
Coconut vinegar: 290 mg/L
ACV: 4 mg/L
Magnesium directly interacts with your muscle tissue through a process called ion transportation. It bonds with specific receptor sites that open up the cell membrane and allow other mineral ions to enter, such as calcium and potassium – these ions help regulate muscle contractions and might ease muscle tension. Also binds to GABA receptors and activates them, which promotes sleep and reduces anxiety and stress – responsible for over 300 other biochemical reactions in the body.
Sodium:
Coconut Vinegar: 450 mg/L
ACV: 0 mg/L
Sodium helps control blood pressure as it attracts and holds water, so the sodium in the blood helps maintain the liquid portion of the blood. Also regulates muscles and nerves as they require electrical currents to function properly – for muscle cells, these electrical currents stimulate contraction of the muscle. Nerves, on the other hand, need electrical activity to communicate with other nerves.
Conclusion: Both offer similar benefits, and while coconut vinegar has a better nutrient profile, it’s probably most preferable for someone on keto or that utilizes fasting – main reason being that it’s high sodium content wouldn’t be as preferable for those with a more standard diet.
References:
1) Dr. Edward Group DC, NP, DACBN, DCBCN, DABFM. (2015, October 5). The Benefits of Apple Cider Vinegar. Retrieved from
2) Life Enhancement Products. (n.d.). Fat reduction: Consumption of acetic acid (vinegar) suppresses body fat accumulation in mice. Retrieved from
3) Life Enhancement Products. (n.d.). Effects of Acetic Acid (Vinegar) on Glycemic and Insulinemic Response to Food: Inhibitory Effects on Digestive and Other Enzymes. Retrieved from
4) What Is Coconut Vinegar and Should You Be Drinking It? | Reader’s Digest. (2017, May 30). Retrieved from
5) Benefits of Coconut Vinegar vs. Apple Cider Vinegar. (2017, September 15). Retrieved from /