This Post Was All About Anxiety Relief: Reduces Stress with St. John’s Wort- Thomas DeLauer. 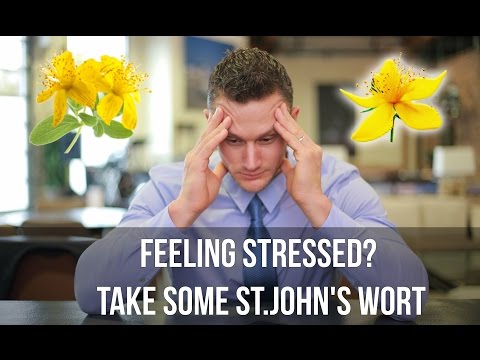 Anxiety Relief | Reduces Stress | St. John’s Wort – Thomas DeLauer… Your Business, Your Brain, and Your Body all work together, learn the ropes at
St. John’s Wort is also known as hypericum perforatum. It is a flowering plant that has been used for thousands of years as a medicinal herb. Key uses are as an antidepressant and an anti-inflammatory. Widely used around the world today for mild to moderate depression. There are many studies that support the use of SJW for these purposes, however understanding exactly how it is working is still under way today. SJW has been shown to help reduce biomarkers of stress, which ties into both depression and inflammation.
Depression and Stress: Chronic stress can lead to depression symptoms, including anxiety, fatigue, sleeping trouble and loss of appetite. It is also known to lead to cognitive impairment, harming memory ability and mental functioning. There are many ways that SJW has been shown to help reduce depression. Below are just a few of the ways the SJW is able to help reduce biomarkers of stress. Depression is thought to be caused by an interruption in brain neurochemistry, particularly from a deficiency of neurotransmitters, including acetylcholine, serotonin, dopamine and norepinephrine. SJO increases the availability of serotonin, dopamine and norepinephrine in the brain. These help to improve your mood, reducing symptoms of depression. Hypericin and hyperforin are thought to be two of the most important components of SJW that reduce depression symptoms.
Hypericin stimulate capillary blood flow and inhibit the enzymes MAO-A and MAO-B. These enzymes are involved in the degradation of the neurotransmitters listed above. It also helps to regulate dopamine levels and action potentials caused by neurotransmitters. Hyperforin is a reuptake inhibitor, making it so neurotransmitters such as serotonin and dopamine are able to create a greater response. This reuptake inhibition does not work the same way that traditional antidepressants work. Rather than blocking 5-HT receptors, SJW results in increased concentrations of sodium and calcium. By making it so that the gradient between the neuron and the synaptic cleft is lesser, reuptake of monoamine neurotransmitters is decreased. It also increases the number of 5-HT receptors, showing possible long-term therapeutic benefit to supplementation. Chronic stress causes interruption of the hypothalamo-pituitary-adrenal (HPA) axis, leading to an overproduction of glucocorticosteroids.
St. John’s Wort has been shown to inhibit genes critical to chronic inflammation. These include the pro-inflammatory cyclooxygenase-2, inducible nitric oxide synthase and interleukin-6. Nitric oxide (NO) synthase is an enzyme that catalyzes the creation of nitric oxide from L-arginine. In areas with inflammation, large quantities of NO exist. In healthy amounts this leads to the removal of organisms causing the inflammation. However, these can become toxic over time, such as with chronic inflammation. Prolonged high concentrations of nitric oxide can lead to tissue damage.
In one study it was found that the reduction of inducible nitric-oxide synthase was due to transcriptional inhibition.This study showed that the supplementation of SJW could help to treat chronic inflammatory conditions, such as chronic stress.
How Much to Take: For those with depression an initial dose would be 300 mg three times daily. Following this initial dose, most will decrease to 300 to 600 mg daily. St. John’s Wort can interfere with a number of different medications, including but not limited to birth control pills, antidepressants and blood thinners, so be sure to talk to your doctor if you are currently on any medications.
References:
1. Mechanism of St. John’s Wort extract…

Leptin Resistance is Behind a Weakened Immune System

What Food Can You NOT Resist?

High Pulse Rate on Keto? Do This…

5 Benefits of Sauna Use (You haven’t heard of)

5 Foods That Cause Visceral Fat Accumulation (Pot Belly) – AVOID THEM