You are here: Home1 / All Articles2 / liss cardio workout

More specifically, you want help with Cardio on a Keto Diet – Cardio Just Got Easier (Endurance)?

This Post Was All About Cardio on a Keto Diet – Cardio Just Got Easier (Endurance). 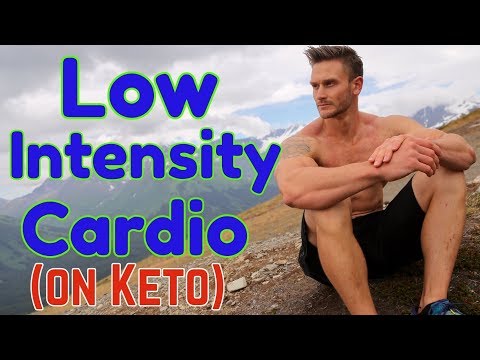 Fat Oxidation & Glycogen Sparing Effect:
Study – published in the journal Metabolism- The study looked at 20 ultra-marathoners and ironman distance triathletes age 21-45 who were top competitors in running events of 50 kilometers (31 miles) or more.
*Specifically looked at the metabolic effects of keto vs high carb for endurance*
One group consumed a traditional high-carb diet, and the other a low-carb diet for an average of 20 months. On day one, the athletes ran on a treadmill to determine their maximum oxygen consumption and peak fat-burning rates. On day two, the athletes ran on a treadmill for three hours at an intensity equal to 64% of their maximum oxygen capacity. During this test, they drank water but took in no nutrition – before the run, athletes consumed either low- or high-carb nutrition shakes consisting of about 340 calories.

Findings:
On average, the low-carb runners’ peak fat-burning rate was 2.3-fold higher than the rate for high-carb athletes: 1.5 versus .67 grams per minute. And the average contribution of fat during exercise in the low-carb and high-carb groups was 88% and 56%, respectively.

Another key finding:
Despite their low intake of carbs, these fat-burning athletes had normal muscle glycogen levels at rest.
They also broke down roughly the same level of glycogen as the high-carb runners during the long run, and synthesized the same amount of glycogen in their muscles during recovery as the high-carb athletes.

Glycogen Sparing Effect:
There were no differences in pre-exercise muscle glycogen concentrations, the rate of glycogen utilization during exercise, and the rate of glycogen synthesis during recovery. Proves that chronic keto-adaptation in elite ultra-endurance athletes is associated with a robust capacity to increase fat oxidation during exercise while maintaining normal skeletal muscle glycogen concentrations. It’s believed that lactate and/or glycerol, which were two-fold higher at the end of exercise in low carb athletes (and then sharply decreased during recovery), may have provided a source of carbons for glycogen synthesis during recovery.

Periodized carb (PCHO): Same overall dietary breakdown, but spread out differently from day to day so that food intake matched the needs of specific training sessions, and with some workouts performed with deliberately low carb levels in the body. Low-carb, high fat (LCHF): 75-80% fat, 15-20% protein, less than 50 grams per day of carbohydrate in order to be in ketosis. Subjects did a 3-day test block consisting of: walking economy, 10km race, and 25km walk. Fat versus carb usage during a 25K walk after the three-week interventions – findings:

Fat Oxidation:
For the high-carb and periodized-carb groups, nothing really changed, but for the low-carb group, there was a dramatic difference. The “after” data showed a massive decrease in carb usage, balanced by a massive increase in fat usage. In fact, the fat-adapted athletes were able to sustain a fat-burning rate of 1.57 grams of fat per minute, which is 2.5 times greater than their “normal” values.

Performance:
All three groups increased their VO2max during the three-week period of intense training, so you would expect to see faster races times. And sure enough, both high-carb groups improved, by an average of 190 and 124 seconds, respectively. In the LCHF group, on the other hand, the gains in VO2max were countered by the decrease in efficiency. The result was no change in race time (they were 23 seconds slower, on average, a difference that wasn’t statistically significant).