You are here: Home1 / All Articles2 / how to cook meat the healthy way

Tag Archive for: how to cook meat the healthy way

How to Grill Meat the Healthy Way: Thomas DeLauer

More specifically, you want help with How to Grill Meat the Healthy Way: Thomas DeLauer?

This Post Was All About How to Grill Meat the Healthy Way: Thomas DeLauer. 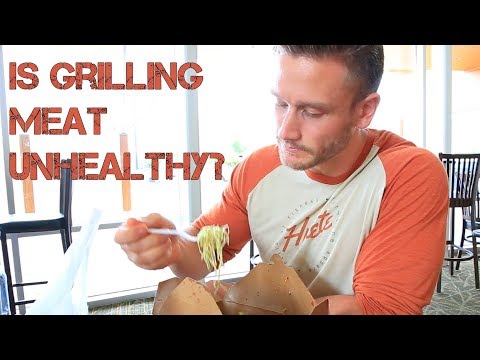 How to Grill Meat the Healthy Way: Thomas DeLauer
Overview:
The problem with traditional grilling comes from the combination of meat with intense heat.
Whether you are using red meat, poultry or seafood, substances in the muscle proteins of these foods react under high heat to form carcinogenic compounds called heterocyclic amines (HCAs) and polycyclic aromatic hydrocarbons (PAHs) HCAS are mutagenic compounds. HCAs can damage the DNA of our genes, beginning the process of cancer development. HCAs may damage DNA and spur the development of tumors in cells of the colon, breast, prostate and lymph system.
On the most basic level, the smoky flavor and the char that you get from a well-grilled steak is not particularly good for you. When cooking at temperatures of 350°F and hotter, fat from the cooking meat drips down on the hot coals, amino acids and creatine react and the smoke that forms contains PAH. And the charred exterior of the meat (or inside, if you like things extremely well-done) is chock full of HCA) (1,2)
Studies:
Both PAHs and HCAs have been linked (one conducted by the National Cancer Institute) that high consumption of well-done, fried, or barbecued meats was associated with increased risks of colorectal, pancreatic, and prostate cancer. In 2009, another study found that people who preferred their steaks very well done were 60% more likely to get pancreatic cancer than those who liked them bloody (or didn’t eat steak at all) Other studies have found that grilling meats is associated with an increase in the likelihood of developing breast cancer (2,3)
Solutions:
A simple way to decrease formation of carcinogenic HCAs is to cook your meat at lower temperatures, like roasting it in the oven and stewing it. If you still want to grill, turn the gas down or wait for charcoal to become low-burning embers and grill leaner meat cuts that will drip less and cause fewer flare-ups and smoke. By raising the grilling surface from the heat source, you can also reduce black char that can form on meat. This char has a high carcinogen content. Either way, cooking via pan is safer than cooking via grill. Pan-frying is another method of cooking that you should do at a lower temperature. Research shows that frying meat at a higher pan temperature, which saves only two minutes of cooking time, produces three times the HCA content of meat cooked at medium temperatures. Research in the Journal of Agriculture and Food Chemistry showed that marinating red meat in beer or wine for two hours significantly reduced HCAs. Scientists believe the antioxidants in these marinades block HCAs from forming. Similarly, a Kansas State University study found that rubbing rosemary, an herb known for its high level of antioxidants, onto meats before grilling cut HCA levels by more than 90 percent. Pair grilled meats with vegetables, particularly cruciferous ones. In one study, men who ate about 2½ cups of Brussels sprouts every day for three weeks reduced their DNA damage significantly. Cruciferous vegetables, such as broccoli and cabbage, contain sulforaphane, a compound that may help the body clear DNA-damaging compounds more quickly. (4)

References:
1) Does Grilling Cause Cancer? – EatingWell. (n.d.). Retrieved from

2) Is Grilling Good for You? Or Bad? Here’s What Science Says | Bon Appetit. (n.d.). Retrieved from