You are here: Home1 / All Articles2 / how to build up calves

Tag Archive for: how to build up calves

More specifically, you want help with Is Calf Muscle Size Genetic? Muscle Conditioning | How to Grow Your Calves- Thomas DeLauer?

This Post Was All About Is Calf Muscle Size Genetic? Muscle Conditioning | How to Grow Your Calves- Thomas DeLauer. 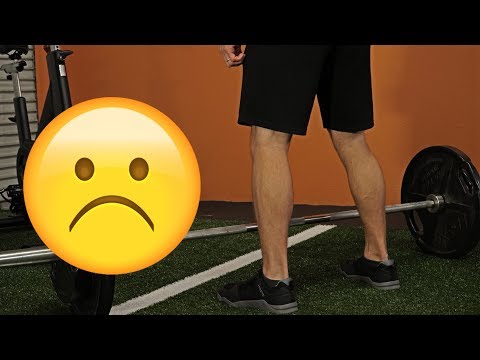 Muscle Fiber Types:
Slow twitch muscle fibers have roughly half the growth potential of fast twitch fibers, and a study published in The European Journal of Physiology compared the composition of fiber types in the soleus and gastrocnemius, as well as with other leg muscles. It was found that the soleus muscle contained predominantly slow twitch (Type I) fibers with the mean for all subjects being 80% (range 64 to 100%)

In contrast, the gastrocnemius and vastus lateralis (side of the thigh) muscles only contained 57% slow twitch fibers (range 34–82%) – so the gastroc, which is the big portion of the calf, contained only 34% slow twitch fibers in some people (1)
There’s another reason that the calves, especially the soleus, are relatively unresponsive to weight training: the calves keep your body upright when you’re standing or walking… More specifically, the soleus -the flat muscle that canvases the entire backside of your leg – is made up primarily of slow-twitch fibers, which means that it is built for endurance, not for the explosive, powerful movements that are propelled by fast-twitch fibers. In day-to-day life, whether you’re walking to work, standing in line, going up the stairs, etc. you’re engaging your calves in a constant, low-intensity workout – as a result, those muscles need to be able to take a beating, and being bigger doesn’t help. As such, slow-twitch fibers just don’t get as big – their myocytes (the cells that make up your muscles) don’t get as much hypertrophy as fast-twitch fibers when you stress them. In any case, the soleus is predominantly a slow twitch muscle as it is more involved in overall stability of the ankle – so the difference in fiber type between the gastroc and soleus has implications for training (more later). Aside from their fiber type composition, there’s nothing inherent that prevents the calves from growing. However, both training status and muscle architecture should be taken into account in your training program. The calves require a high volume and a high frequency of high reps, especially the soleus – the gastrocnemius requires more moderate training parameters

Calf Insertion Points:
Most sprinters and runners in general have high calves and long Achilles tendons since the tendons act like rubber bands – they absorb the force and return it, just like a rubber band, and the longer the rubber band (the tendon), the more force it can produce. So, those that have naturally “high-riding calves,” where the gastrocnemius – the muscle that forms the bump at the top of the back of your lower leg, and that is made up of fast-twitch fibers – is super tight, and these people are just naturally better at activities like sprinting. Simply, it’s easier to jump high and run fast when you have high cut calves with short muscle bellies and long achilles tendons.

Long muscle bellies:
This is considered a genetic advantage in bodybuilding because it allows you to grow more mass and have fuller muscles.

Training the Calves:
Doing calf work with the knee bent (i.e. seated calf raise) tends to work the soleus preferentially, since the gastroc crosses the knee, if the knee is bent, the gastroc can’t contribute as significantly to force output.

To sum up:
The gastroc is primarily a fast-twitch muscle. The soleus is primarily a slow-twitch muscle. If you do calf work with straight legs, you work both the gastroc and soleus. If you do calf work with bent legs, you work only the soleus. When you bounce, the achilles tendon does much, if not most of the work and the calf does little. It’s believed that upper body muscles have more androgen receptors than lower body – thus, it is possible that this hormonal difference permits greater development of upper limb muscles than lower limb.