You are here: Home1 / All Articles2 / how much vitamin d should i take

Tag Archive for: how much vitamin d should i take

More specifically, you want help with Vitamin D Toxicity: Is This a Danger??

so I wanted to touch on vitamin D
toxicity because there’s a bit of fear of taking too much vitamin D when in
fact it might not be as scary as you might think this document is by Mayo
Clinic and it’s a great article and it says this vitamin D is not as toxic as
was once thought a historical and up-to-date perspective so this is just a
brief history on why some people are still to this day a little bit scared
about taking too much vitamin D and the 40’s vitamin D was used for rheumatoid
arthritis but did you realize the amount they were using were between two hundred
thousand IUs and three hundred thousand IUs I mean an average person
might take six hundred IU’s to a thousand IU’s right there talking 200
thousand to three hundred thousand and the reason this works is vitamin D really
helps the immune system and gets rid of inflammation but then in the fifties
they were actually fortifying the dairy products and other products but there’s
been some complaints from parents with children who had some side effects
calcification and the kidneys and even some calcification on their heart valves
so the fortification of vitamin D and dairy was banned in Europe but not
necessarily in America or Canada or I think even in the UK now years later
they found out exactly why these specific children had these problems it
was because they had a rare genetic disease called Williams syndrome in
which case you don’t want to take vitamin D at all or else you’ll have
calcification in the valves of the heart as well as kidney stones so if we take
out this rare genetic disease there wasn’t a lot of side effects there was
just a lot of benefits so nowadays when you look at vitamin D it always says
precaution make sure you don’t take too much you could experience a toxic effect
now that statement is in all the textbooks it’s on all the websites so
it’s all over the place so people are a bit nervous about that but if you go
through this article it would take fifty thousand to a
hundred thousand IU’s of vitamin D for months two years before vitamin D became
toxic now this is a lot more than what people even consider toxic and when we
say toxicity we’re talking about hypercalcemia too much calcium in the
blood which could lead to kidney stones however there’s very little evidence if
any evidence that shows that taking vitamin D will lead to kidney stones at
all so people end up taking smaller amounts 1,000 to 2,000 IU’s per day for
a period of time well I did another video which I will put a link down below
that shows that if you’re deficient and you take a thousand milligrams it could
take four months or longer before your deficiency is satisfied to be able to
put autoimmune conditions into remission
it does take large amounts for long periods of time and on top of that if
you wanted to decrease the risk of any potential for this really what you do is
you actually drink 2.5 litres of fluid every single day and you avoid taking
calcium as a supplement and you avoid dairy and that will actually bring the
risk for kidney stones way down so you can then have the anti-inflammatory
benefits for autoimmune conditions and also realize that anything that I say in
this video is not meant to replace your medical care check with your doctor
before taking any of my advice and before you go check out this video on
vitamin D dosage I think you’ll find it quite interesting

This Post Was All About Vitamin D Toxicity: Is This a Danger?. 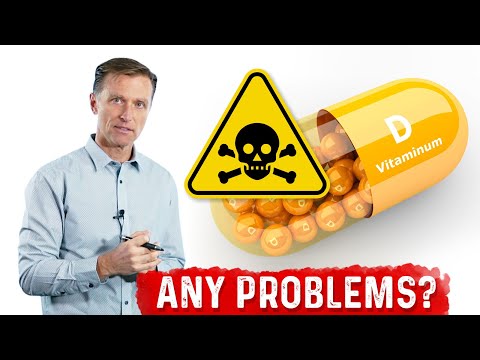 Should you be afraid of taking too much vitamin D? Find out.

In this video, we’re going to talk about vitamin D toxicity. Some people are afraid of taking too much vitamin D, when it may not be as scary as you might think.

According to an article by the Mayo Clinic, vitamin D may not actually be as toxic as was once believed.

In the 1940s, vitamin D was used for rheumatoid arthritis. But, the amounts being used were between 200,000 and 300,000 IUs of vitamin D. The reason this could have helped is that vitamin D helps support the immune system and helps lower inflammation.

In the 1950’s they were fortifying products like dairy products with vitamin D. But, there were some complaints from parents with children who had side effects. The fortification of vitamin D in dairy was banned in Europe, but not in some other countries, including America.

Years later, it was discovered that these children might have experienced these side effects due to a rare genetic disease called Williams syndrome. With Williams syndrome, you don’t actually want to take vitamin D at all.

Now, when you look at vitamin D, it always says something along the line of “don’ take too much, you could experience a toxic effect.”

But, according to this article by the Mayo Clinic, it would take getting 50,000 to 100,000 IUs of vitamin D for months to years before vitamin D would become toxic. This is actually a lot more than what most people consider toxic.

When talking about vitamin toxicity, we’re referring to hypercalcemia, which is too much calcium in the blood.

When people are afraid of vitamin D toxicity, they end up taking smaller amounts like 1,000 to 2,000 IUs per day. But, with this amount, it could actually take four months or more to bring a vitamin D deficiency up to a normal level.

If you want to decrease the potential risk of kidney stones, you could drink 2.5 liters of fluid every day, avoid taking calcium and avoid dairy.

Thanks for watching! I hope this video helps you better understand vitamin D toxicity.