You are here: Home1 / All Articles2 / Keto Course3 / 5 Homemade Coffee Creamers That Will Change Your Morning Forever (&...

This Post Was All About 5 Homemade Coffee Creamers That Will Change Your Morning Forever (& mobilize fat). 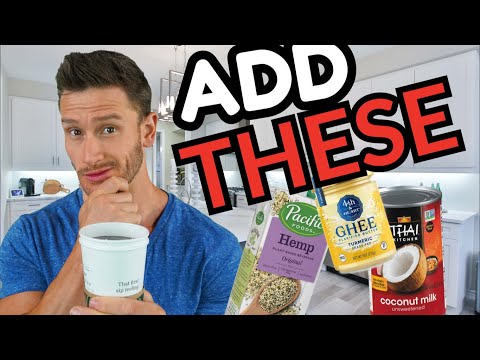 It’s important that I am honest and to say that this video does have a sponsorship from Laird Superfood, supporting them is a good way to support my channel!

Let’s make our OWN CREAMER! I’m talking tasty creamers to add to your morning coffee that have amazing health and PERFORMANCE benefits!! Let’s dive in and I’ll see you in the COMMENTS!!

Coconut cream is basically the same thing as coconut milk, except the coconut meat-to-water ratio is about four-to-one

The exact antimicrobial compounds that coconut oil contains in coconut cream, too – contains lauric acid, which converts to monolaurin in the body

Lauric acid itself is metabolized faster than other saturated fats and is burned as fuel more quickly than palmitic, stearic, oleic, elaidic, linoleic, or linolenic fatty acids. American Journal of Clinical Nutrition 2000

Microbes aren’t able to evolve resistance to lauric acid and monolaurin because they work through three mechanisms: (i) destruction of gram-positive bacterial cell membranes and lipid-coated viruses, (ii) interference with microbial signal transduction and transcription, and (iii) stabilization of human cell membranes.

Minerals: Rich in copper, iron, manganese, and magnesium – antioxidants: Rich in catechins, flavanols, and polyphenols that protect against oxidative stress and inflammation.

Unlike butter, ghee and other types of clarified butter contain virtually no lactose and are very low in casein – also contains butyric acid

Steviosides are used by lactobacilli and bifidobacteria as a nutrient source

Mint (peppermint has some cool benefits)

Peppermint helps with digestive issues is because it activates an anti-pain channel in the colon:

KETO Grilled Cheese FROM SCRATCH in 10 MINUTES! You’ve Got To Try This...
Scroll to top