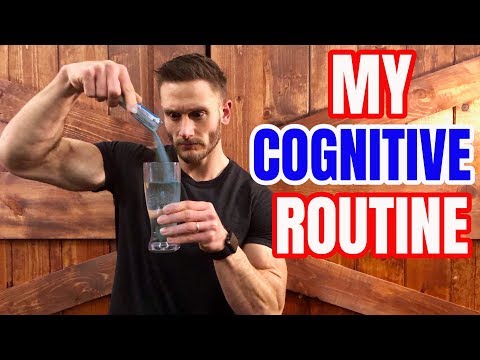 Increase Mental Performance | Cognitive Boost Routine | Life Optimization- Thomas DeLauer… Keep Blood Sugar Stable-
Consuming high glycemic foods, such as refined sugars and carbohydrates, causes our blood sugar to rise rapidly. When blood sugar rises, insulin is released from the pancreas to move the sugar from the blood into the cells – this spike in insulin leads to a quick drop in blood sugar, leaving you feeling lethargic.

Elevated Blood Sugar & Mental Clarity-
Chronically high levels of blood glucose, has been linked to an elevated risk of dementia and a smaller hippocampus, a brain region critical for memory. In other words, higher levels of glucose are associated with a smaller hippocampus and worse memory. Cognitive problems often arise because amyloid plaque builds up in the brain, compromising brain function.

HIIT for Mental Clarity-
When you exercise, your muscle cells pump out a protein called FNDC5 – this protein, by fragmenting into a second component called irisin, ramps up production of brain-derived neurotrophic factor, or BDNF. It’s BDNF that stimulates the production of new neurons or nerve cells and actually helps your brain build new architecture – plus, BDNF protects nerve cells against damage, including damage related to aging. A study published in the journal PNAS found that in 120 older adults, that exercise increased the size of the anterior hippocampus, leading to improvements in spatial memory. Exercise increased hippocampal volume by 2%, effectively reversing age-related loss in volume by 1 to 2 years – increased hippocampal volume is associated with greater serum levels of BDNF.

HIIT vs LISS – Study-
A study published in the journal Medicine and Science in Sports and Exercise looked at the effects of HIIT vs LISS on BDNF levels in 15 volunteers. On separate days, two subsequent 30-min endurance rides were performed at 20% below the VTh (VTh – 20) and at 10% above the VTh (VTh + 10) (ventilatory threshold)

Cold Water Therapy-
When exposed to cold showers, the sympathetic nervous system is activated, and the blood levels of beta-endorphin and noradrenaline is increased. Norepinephrine, an organic chemical that functions in the brain and body as a hormone that can help people feel happier, naturally is released in the brain as well. The cold water can also increase production of beta endorphins, or ‘feel good’ molecules that will give you a sense of wellbeing. The electrical impulses from peripheral nerve endings to the brain stimulates the dopaminergic transmission in the mesocorticolimbic and nigrostriatal pathway.

How To Adjust Keto Diet & Intermittent Fasting Patterns Around Your Lifestyle? – Dr.Berg

People with 6-Packs DON’T Do These 13 Things

Eggs Increase Your Risk of Early Death from a Heart Attack…NEW STUDY!