You are here: Home1 / All Articles2 / Keto Course3 / 4 Foods That Mess Up Your Hormones

More specifically, you want help with 4 Foods That Mess Up Your Hormones?

This Post Was All About 4 Foods That Mess Up Your Hormones. 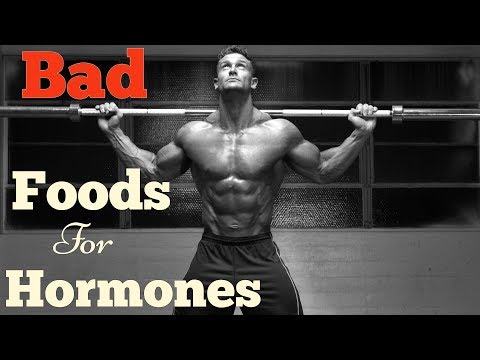 Please Subscribe for 3x Videos Per Week and Live Broadcasts!

According to the National Institutes of Health, we do not fully understand the health effects of pesticides, but their use is associated with cancer, neurological conditions, and diabetes. (9)

Phytoestrogens are found in numerous plants, including legumes, broccoli, beans, and soy products. Studies have found both positive and negative effects of phytoestrogens, so these are not necessarily bad – have been found to inhibit certain types of cancer and improve metabolic parameters (1).

In the Avon Longitudinal Study of Pregnancy and Childhood, it was found that 51 of 7,928 boys born suffered from hypospadias, a conditions where the penis does not work and appears abnormal.

It was found that boys born to vegetarian mothers who had higher phytoestrogen content in their diets were more likely to be born with hypospadias.

Soy formulas are of particular concern as this intake can be as high as four to seven times that of the quantity of phytoestrogen per pound of body weight as that of a traditional soy-based Asian diet. (7)

This large consumption of proinflammatory foods is coinciding with an increase in chronic inflammatory diseases, including obesity, cancer, Alzheimer’s disease, cardiovascular disease, and may others.

In a 1998 study published in the Journal of Nutrition, rats were fed diets containing either 0%, 5% or 10% flaxseed while pregnant and during lactation.

In the US, the vast majority of our meat and dairy come from concentrated animal feeding operations (CAFOs).

Animals raised in CAFOs are treated horribly, packed together, and fed unnatural diets. They are fed questionable chemicals to encourage faster growth and pumped with antibiotics to keep them alive.

These antibiotics, hormones, and other chemicals may disrupt your endocrine system.
Estrogens and insulin-like growth factor found in dairy are thought to encourage initiation in breast, endometrial, and prostate cancers. (11)

1. Endocrine modulators in the food chain and environment

2. Endocrine disruptors: a review of some sources, effects, and mechanisms of action on behavior and neuroendocrine systems

3. Soy as an endocrine disruptor: cause for caution?

4. A maternal vegetarian diet in pregnancy is associated with hypospadias. The ALSPAC study team….

9. GMOs and pesticides: helpful or harmful?

11. Hormones in dairy foods and their impact on public health – a narrative review article
/

Cavities: The 2nd Most Common Disease Worldwide…but Why?

Are You Turning into a Germophobe?

I Have Low Testosterone… What Happens Next?

Why Diabetics Get High Blood Pressure Scroll to top