More specifically, you want help with 3-Year Follow Up Interview with 600+ lb Steve? 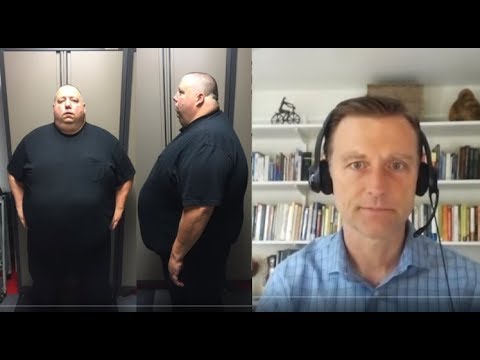 Dr. Berg interviews a very interesting follow up interview with Steven Schaafsma, he started out being 600lbs and in this interview he is now down to 248lbs.

Dr. Berg: Hey guy! I have a very interesting follow up from a video we did before on Steven Schaafsma. And this guy started out 600lbs. I am having a picture up right now, we are gonna look at the progression of where he came from, where he is now because people wanted to know, is he still maintaining his weight? How was he doing? I think it has been three years now. Right?

Steven: Yea. 3 years this October 6 since I started.

Dr. Berg: First of all, they are not gonna believe that you are 600lbs right?

Steven: I was always like 375 most of my life and then I kind of quit working at a really physical job and I move to a city and I had a more sedimentary job and its slowly kind of crapped on and crapped on about a 8 year period, 10 year period. And the problem was I got so big and I was like “Oh I am gonna try tomorrow and then 3 – 4 years later, It just happen and then all of the sudden I made the decision to start and then I’ve lost and I’ve tried like I have told you before, trying to lose in all those other ways never worked until I started the Keto (Ketogenic Diet) and it is probably the best thing that I ever done and it has been pretty easy actually to do it.

Dr. Berg: And you also did Intermittent Fasting too, right?
Steven: I’ve been doing intermittent fasting now for a year and three months. I have one meal a day and I am a 23.. well like, 23 and a half. I have one meal a day and that’s it.
Dr. Berg: So here you are 600lbs, it seems to me that if you are 600lbs, literally I cannot imagine how your knees feel walking, going upstairs, going in the airport and sitting in a plane like.. It’s just like a whole new different experience I cannot imagine. What was that like?

Do We Need Supplements (Vitamins & Minerals) If We Are Healthy?

Dr. Berg “Trying” to Find Food at the Grocery Store Scroll to top