You are here: Home1 / All Articles2 / Keto Course3 / 3 Signs that You’re Magnesium Deficient

This Post Was All About 3 Signs that You’re Magnesium Deficient. 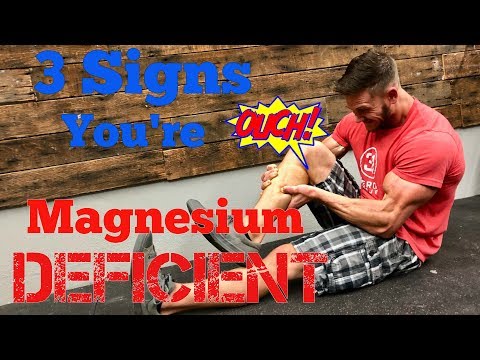 Depleted soil conditions mean that plants (and meat from animals that feed on these plants) are lower in magnesium.

Both a high sugar intake and elevated insulin levels (which can result from a high intake of refined carbs, including sugar) have been shown to increase the excretion of magnesium by the kidneys, by inhibiting tubular reabsorption (the same process that leads to calcium excretion) and by guzzling through the body’s magnesium reserves during sugar metabolism

When magnesium contacts your cell membranes, it bonds with specific receptor sites that open up the cell membrane and allow other mineral ions to enter, such as calcium and potassium. These ions help regulate muscle contractions and might ease muscle tension

If there is too much calcium in your body, which is common in the typical American diet, there won’t be enough magnesium to balance out the calcium so your muscles won’t be able to properly relax (3)

Magnesium aids this process by activating the parasympathetic nervous system, the system responsible for getting you calm and relaxed

Magnesium regulates neurotransmitters, which send signals throughout the nervous system and brain and regulates melatonin, which guides sleep-wake cycles in your body

It also binds to gamma-aminobutyric acid (GABA) receptors and activates them. GABA is the neurotransmitter responsible for quieting down nerve activity

A lack of magnesium can result in low GABA levels, and when GABA is low, your brain gets stuck in the “on” position and it becomes impossible to relax (4)

Increasing GABA not only promotes sleep, but also reduces anxiety and stress

A 2012 report, published in the Journal of Neuropharmacology,
Magnesium deficiency caused an increase in the production of cortisol in the brains of the mice, specifically by activating the paraventricular hypothalamic nucleus, a part of the brain that controls responses to stress and anxiety

Concluded: Magnesium calms your nervous system and prevents excessive cortisol by restricting its release and acting as a filter to prevent it from entering the brain (7)

5) How Magnesium Can Help You Sleep. (n.d.). Retrieved from

6) The effect of magnesium supplementation on primary insomnia in elderly: A double-blind placebo-controlled clinical trial. – PubMed – NCBI. (n.d.). Retrieved from

I Have Absolutely NO Appetite – Do I Eat?

4 Immune Boosting Foods NOBODY Talks About

Fructose: The Most Dangerous Sugar for Belly | Dr.Berg Scroll to top