You are here: Home1 / All Articles2 / Keto Course3 / 10 Triggers of Inflammation

More specifically, you want help with 10 Triggers of Inflammation? 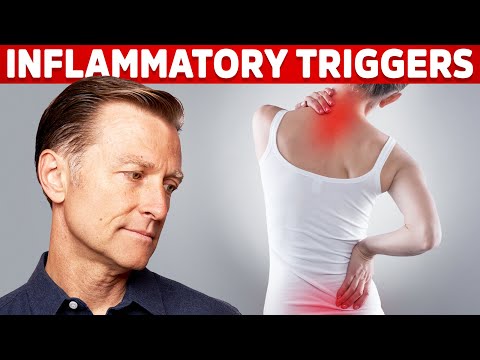 In this video, Dr. Berg discussed about the 10 triggers of inflammation.

Problems of Inflammation
1. Cancer tends to travel and migrate to areas of inflammation.
2. There is an immune reaction with histamine – too much histamine in the body could make you tired.

10 Triggers of Inflammation
1. Food Allergies (Dairy, Nuts, Gluten) – Eating something you are allergic to would cause inflammation in the gut, small or large intestines, certain parts of the body could be allergic to certain things but not the other parts.
2. Insulin Resistance (Sugar) – This comes from sugar (Hidden Sugars like juice, bread, pasta, cereal, and sweetener) and could cause higher amounts of inflammation, stiffness, pain on the body and the joints. Sugar is highly inflammatory.
3. Cortisol (Autoimmune) – It is an anti-inflammatory hormone and is produced by the outer portion of the adrenal glands. Low cortisol or cortisol resistance could cause inflammatory condition. Any condition that includes taking synthetic cortisol is an adrenal weakness. Licorice root is good to take as a natural cortisol replacement.
4. Old Injuries – Intermittent fasting would greatly reduce the inflammation even from old injuries.
5. Infection – It is part of the immune system where the body attacks certain things. It is recommended to take herbal antibiotics like cloves, oregano, and garlic, avoid the sugar that feeds the infection.
6. Oxidants (Free Iron) – This is from too much sugar, junk food, alcohol and free iron. Free Iron is very corrosive and oxidative in the body, it destroys and oxidizes the brain, arteries and would create a rusting effect. Too much excess iron could cause a lot of infection, oxidant and more problems.
7. Alcohol (Junk Foods) – the liver would be damaged and would cause a lot of inflammation.
8. Omega 6 (Corn, Soy) – It’s highly inflammatory GMO products.
9. Raw Nuts (Seeds) – Has enzyme inhibitors and tend to create problem with the digestion especially in the gallbladder.
10. Gallbladder – Congested gallbladder swells up and becomes deficient in bile that could cause bloating and inflammatory condition in the gut.

WHY You Need Keto and Intermittent Fasting

How to Fix the Swollen and Puffy Face / Eyes